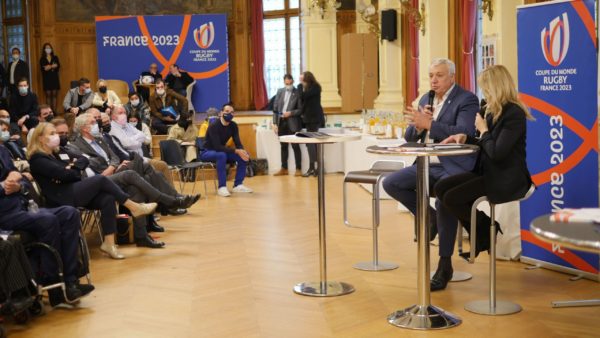 The 2023 Rugby World Cup in France is following the footsteps of the Paris 2024 Games. Its organising committee, headed by Claude Atcher, unveiled its social and environmental policy on Tuesday 7 December in Paris. It looks like a sister to the vision of the Paris 2024 OCOG. The stated objective is to organise a positive impact competition in less than two years and to set new standards for an international sporting event in terms of social responsibility, inclusion and sustainable development. No less. To achieve this, France 2023 has announced four commitments: to act for a sustainable and circular economy; to commit to education, training and employment; to reduce the impact on the environment; to support inclusion and accessibility. In parallel, the organising committee presented fifteen innovative projects, already active or soon to be deployed, which will provide concrete proof of its action. Examples? Like Paris 2024, the 2023 World Cup relies on a responsible purchasing policy, based on a grid of environmental criteria, which will reserve contracts for companies in the social and solidarity economy (SSE). Its Campus 2023 programme aims to train 3,000 young people in the sports event industry through three courses (sport, tourism, security). The organising committee also announced last week that a Wheelchair Rugby World Cup would be held alongside the global tournament, between the quarter-finals and semi-finals. It will be held in a French city yet to be determined. Other initiatives include a digital platform for green mobility where eco-responsible solutions will be listed (carpooling, green taxis, electric scooters and buses, etc.), and the use of recycled computer components to manufacture the medals for France 2023. Finally, the 660 players of the World Cup will be mobilized to engage in positive impact initiatives, on and off the pitch.