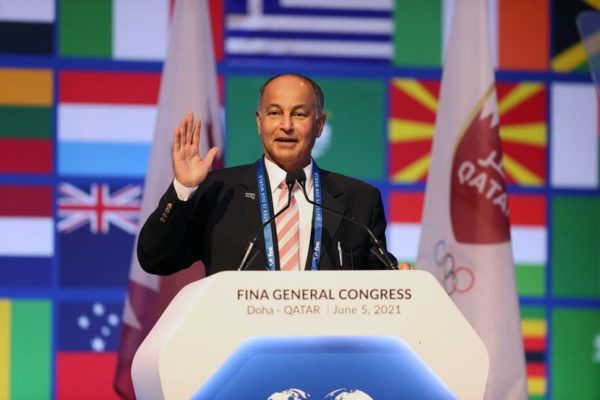 There is no time to lose for Husain Al Musallam (pictured above), the new president of the International Swimming Federation (FINA). The Kuwaiti leader, elected unopposed on June 5th in Doha to succeed Uruguay’s Julio Cesar Maglione, took advantage of his second day at the body’s headquarters in Lausanne on Thursday, June 24th, to sign two cooperation agreements. The first, concluded with Bhutan, provides for the construction of the country’s first swimming pool in the foothills of the Himalayas. It will be located at an altitude of 2,400 metres and will be one of the highest swimming pools in the world. The facility will be funded by FINA as part of a development programme – Pools for All Programme – launched by the international body in 2019. The other agreement signed on Thursday by Husain Al Musallam concerns the creation in Franschhoek, South Africa, of a new development centre dedicated to the African continent. It will house African swimmers who want to live and train in an aquatic complex with international standards. The new FINA President also held an online press conference on Thursday, June 24th, during which he assured that he would be transparent, especially in terms of communication. Interviewed by FrancsJeux, Husain Al Musallam acknowledged that the sanitary crisis had had a negative impact on FINA’s finances, but that a savings plan had already been launched, to reduce travel and administration expenses in particular. “But we will not touch the aid allocated to swimmers and coaches,” he said. “It will even be increased.” The FINA president repeated his willingness to work with the promoters of the ISL, the professional swimming league launched in 2019. “I met with them in 2019 and again this year by zoom,” he explained. “We will work with the ISL if the ISL wants to work with FINA.”