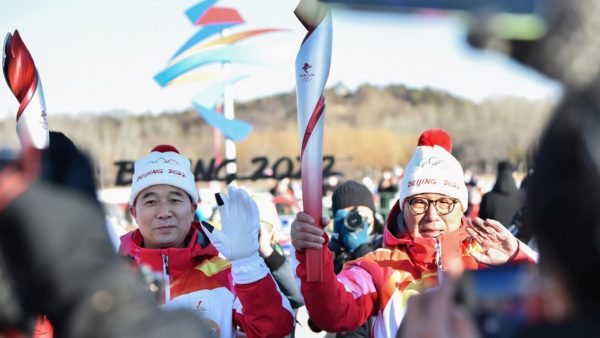 It’s on. The Olympic Torch Relay for the Beijing Winter Games was launched on schedule on Wednesday 2 February, two days before the opening of the Games. Due to the health crisis, the Chinese wanted it to be very minimalist, since it was reduced to just three days, with a route limited to the cities involved in the competitions: Beijing, Yanqinq and Zhangjiakou. The programme included only 12 stages, including the Summer Palace in Beijing and the Great Wall of China, which the flame had already visited before the 2008 Beijing Summer Games, but no less than 1,200 torchbearers. The flame was lit on Wednesday morning in sub-zero temperatures by Chinese Vice Premier Han Zheng. The first day saw the torch pass into the hands of some of the biggest names in Chinese sport, including Luo Zhihuan, a former speed skater and 1963 world champion, and above all former basketball player Yao Ming, who became a world star during his years with the Houston Rockets in the NBA. The torch relay will end on Friday 4 February at the Bird’s Nest in Beijing, the Olympic stadium chosen by the organisers as the setting for the opening ceremony.