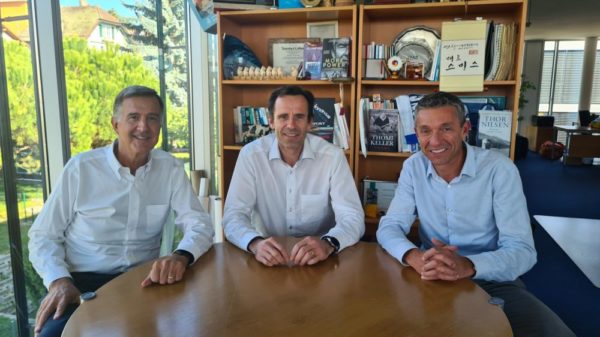 A page is being turned at the International Rowing Federation (World Rowing). Matt Smith (pictured above, left), its executive director for a quarter of a century, will step down at the end of the year. But the Lausanne-based body has already found a replacement for him. It has announced the recruitment of Vincent Gaillard (on the right) from January 1st, 2022. Matt Smith joined the organisation in 1992, when it was still called FISA, as Director of Development. Three years later, he moved up the hierarchy to become executive director. His successor, Vincent Gaillard, has worked for the NBA, Coca-Cola and FIFA. He has also been CEO of AGFIS and EPCR. There are no changes in sight, however, for the presidency of World Rowing. Jean-Christophe Rolland (in the centre of the photo), who was first elected in September 2013, will be re-elected on November 6th, for a third term. The Frenchman is the only candidate in the running for the presidential seat.