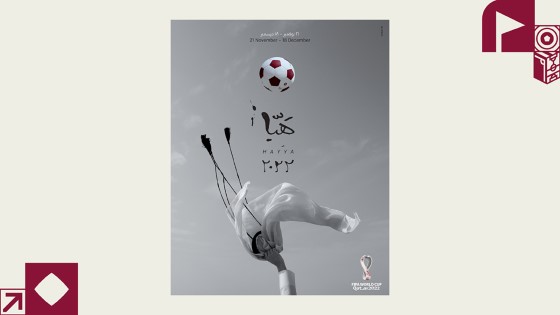 Symbolic but still highly anticipated. The organisers of the 2022 Football World Cup in Qatar unveiled the official poster of the event on Wednesday 15 June at Doha’s Hamad International Airport (photo above). It was designed by a local artist, Bouthayna Al Muftah from Qatar. Surprise: the poster is monochrome. It features the gutra, the traditional Arab headdress. It is also illustrated with a balloon thrown in the air. For the first time, a series of posters has been designed for the tournament, all by Bouthayna Al Muftah. The seven so-called “secondary” posters illustrate the Arab world’s passion for football. Bouthayna Al Muftah said she spent two years working on the posters. “My main inspiration comes from the concept of collective memory, she explained in a FIFA statement. My main inspiration was the concept of collective memory. Most of my work focuses on past experiences, memories, linking them to the present and archiving them in a contemporary way. I wanted the posters to follow this theme and tell the story of football culture in Qatar.” The revelation of the 2022 World Cup poster came a day after the 32nd and final qualifier for the finals, Costa Rica, defeated New Zealand the previous day in a play-off. With 159 days to go before kick-off.