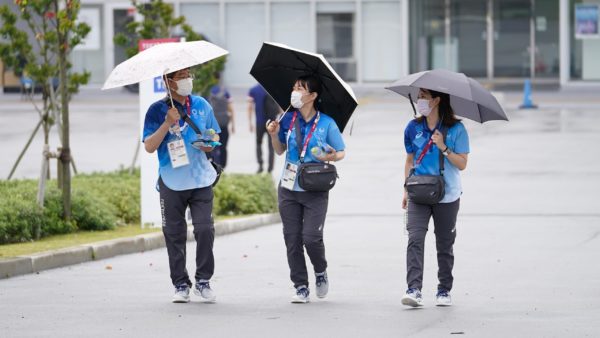 Predictable. According to an investigation by the Japanese news agency Kyodo News, the lack of spectators at the Tokyo 2020 Games and the fear of the virus have had a very direct effect on the stock of uniforms planned for volunteers at the Olympic and Paralympic event. As many as 28,000 of these official outfits were not used and were left in boxes. The reason for this was a spate of withdrawals by volunteers selected by the organising committee, mainly due to the postponement of the Games and the health crisis. The organisers had planned to call on 48,000 volunteers. Their official outfits had cost around 15 million dollars. But the numbers were cut back. The largest stockpiles are in Tokyo, but 10 other municipalities are also said to have uniforms on hand, including Chiba and Saitama. The uniforms had been purchased by the local authorities from Asics, the official sponsor of the Tokyo Games, with a financial contribution from the organising committee. The city of Tokyo was left with around 21,000 pairs of shoes and 23,000 polo shirts. In Saitama, the stock includes outfits for about 2,000 people. In Miyagi and Fukushima prefectures in northeastern Japan, the unopened boxes contain 1,000 and 800 official uniforms respectively. The question remains: what to do with these thousands of uniforms? Several of the municipalities concerned have asked the organising committee for advice, but have not received a precise answer. As the uniforms carry the official logo of the Tokyo Games, they are subject to certain commercial rules and are therefore difficult to recycle. In Sapporo, the authorities donated them to schools for the visually impaired. The uniforms are used by players of goalball, a team sport on the Paralympic Games programme.