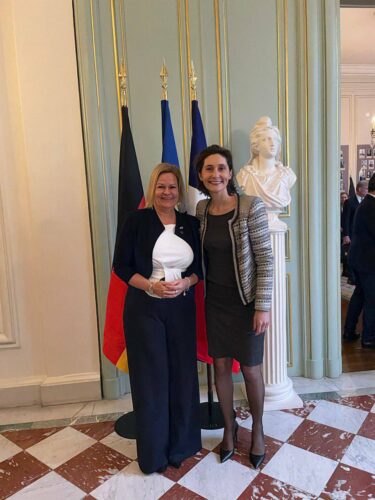 With less than two years to go before the Paris 2024 Games and the Euro football tournament, France and Germany are sealing their alliance on the sporting front. A Franco-German Council of Ministers was held on Sunday 22 January to mark the 60th anniversary of the signing of the Elysée Treaty. It was concluded by the desire of the two sports ministers, Amélie Oudéa-Castéra for France and Nancy Faeser for Germany (photo above), to “work closely together over the coming years on the implementation” of several projects. The first is planned for 2024. The two countries want to take advantage of the men’s Euro football tournament in Germany and the Olympic and Paralympic Games in Paris to imagine a “summer of sport” highlighting “the expertise and capacity of the Franco-German couple to organise major sporting events that are responsible, inclusive, involve the local population and leave a lasting legacy.” The second project is more distant. The two ministers explain that they want to build on the experiences of Euro 2024 and the 2024 Games to establish “common standards for the responsible organisation of major sporting events, taking into account the requirements of energy sobriety and ecological transition, as well as human and social rights imperatives, with a view to achieving greater acceptability of major sporting events and a sustainable legacy.”