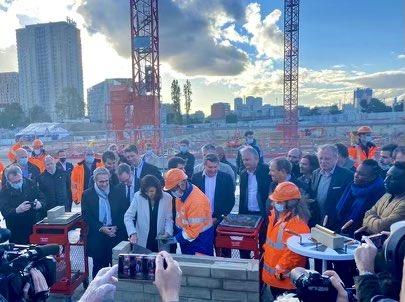 We’re moving forward, we’re moving forward. With less than three years to go until the Paris 2024 Games, a new construction site began on Tuesday, October 5th, with the symbolic laying of the first foundation stone for the future Arena at Porte de la Chapelle, in the north of the capital. Anne Hidalgo, the mayor of Paris, and Tony Estanguet, the president of the organising committee, took the trowel to mark the event. This 7,000-seat hall, initially planned for the south of the city, is to host the badminton and rhythmic gymnastics events at the Paris 2024 Olympic Games, followed by badminton and weightlifting at the Paralympic Games. The new arena is the only Olympic venue in Paris and is due to open in 2023. After the Games, it will serve as the official venue for Paris Basketball, but should also host sports events, concerts, shows and conferences.