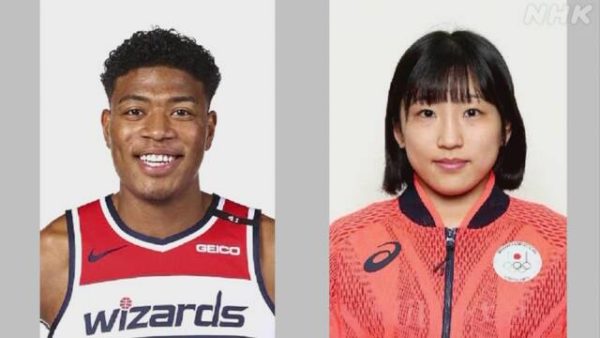 Predictable. The Japanese Olympic Committee (JOC) unveiled the selection of athletes who will participate in the Tokyo Games on Monday, July 5th. With 582 athletes, it is the largest in history. It greatly surpasses the previous record, set at the 1964 Tokyo Games, where the country was represented by 355 Olympians. At the Rio Games in 2016, the Japanese delegation included 338 athletes. The Japanese delegation will march in the opening ceremony on Friday, July 23rd, behind its two flag bearers, basketball player Rui Hachimura, 23, and wrestler Yui Susaki, 22 (pictured above). Rui Hachimura, born to a Japanese mother and Beninese father, is the first basketball player to be named flag bearer for Japan at the Olympic Games. Sprinter Ryota Yamagata, the current national record holder in the 100m, has been named captain of the delegation. He is expected to take the Olympic oath at the opening ceremony with table tennis player Kasumi Ishikawa, who has been named vice-captain of the Japanese team.