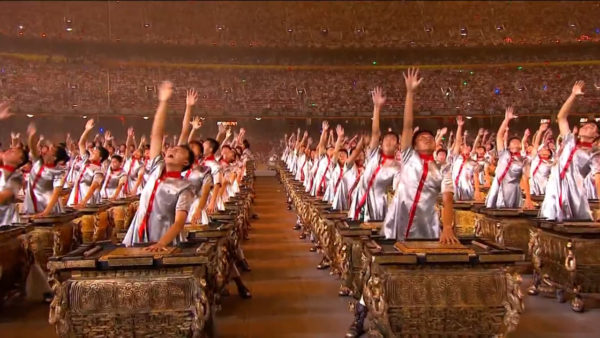 The Chinese have warned that the opening ceremony of the Beijing 2022 Winter Games will not match the size and splendour of the 2008 Summer Games. The number of extras has been reduced, not least because of the weather conditions. And the health situation has led the organisers to consider a smaller event. But according to Yiannis Exarchos, the Executive Director of OBS (Olympic Broadcasting Services), the IOC’s audiovisual arm, the evening of Friday 4 February 2022 will not disappoint anyone. The Greek had the privilege of attending the rehearsal of the opening ceremony. When asked about his impressions at an IOC press briefing on Wednesday 19 January dedicated to the media operations of the Beijing Games, Yiannis Exarchos did not reveal any details. But he did say: “What I can probably tell you is that this ceremony is probably equally impressive as the one in 2008, which we know is one of the most iconic opening ceremonies in the history of the Olympic Games. And it’s completely different. It’s equally impressive, equally moving, but completely different. It reflects our times.” What the two events have in common: Zhang Yimou. The Chinese director, known in particular for his film Wives and Concubines (1991), was in charge of the opening of the Summer Games in Beijing in 2008. He was chosen to direct the opening of the Beijing Winter Games 14 years later.