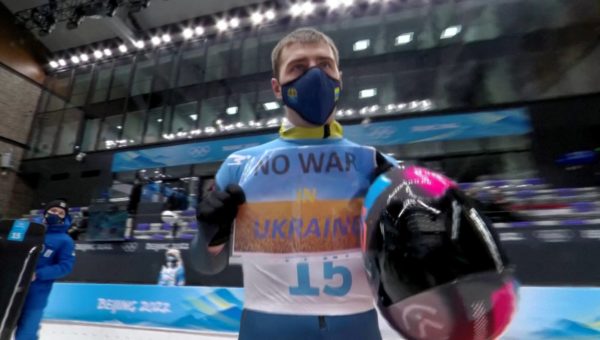 Politics was the order of the day at the Beijing 2022 Winter Games. A Ukrainian skeleton specialist, Vladyslav Heraskevych, held up a sign with the words “No war in Ukraine” for the cameras as he finished his run on the Yanqing track (pictured above). “It’s my position, like any normal people I don’t want war. I want peace in my country and I want peace in the world, so nobody wants it. That’s my position, I fight for that, I fight for peace.” The IOC did not stand idly by in the face of this expression of political opinion on the field of competition. But the body did not sanction the Ukrainian athlete. “The message ‘No War’ is a message we can all identify with,” suggested Christophe Dubi, the IOC’s executive director of the Olympic Games. But that does not mean that the IOC wants other athletes to join in. Mark Adams, the IOC spokesman, agreed: “We all want peace. Athletes themselves have agreed that the field of play and the podium is not the place for any kind of statement because we need to remain politically neutral … The message was understood. It (the sign) wasn’t repeated and I think we can move on.” No doubt. But the Ukrainian Olympic Committee did not really follow the IOC’s recommendation to the letter. The national body took to social media to lend its support to its athlete’s move. “The Olympic Team of Ukraine … expresses a unanimous call for peace together with (our) native country, the Ukrainian Olympic Committee wrote on social media. being thousands of kilometers away from the Motherland, mentally we are with our families and friends.”