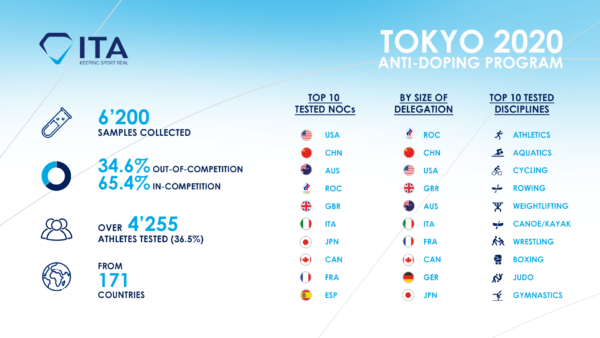 With the Tokyo Games now over, the International Testing Agency (ITA) has done its homework. They are good. Which is not surprising. It explains this in a press release filled with figures and data: the sanitary context of the Olympic event did not prevent it from “fully implementing its anti-doping programme” in the Japanese capital. A total of 6,200 samples were collected during the Tokyo Games from more than 5,000 doping tests, carried out on 4,255 athletes, more than a third of the participants. In the end, only six anti-doping rule violations have been found to date, as a result of the ITA’s testing programme. The vast majority of doping controls were targeted and followed a quality approach based on a thorough risk assessment, performance and available information. In proportion to the size of the delegations, the greatest number of tests were conducted on athletes from the ROC (Russian Olympic Committee), China, the USA, Great Britain and Australia. Athletics, water sports, cycling, rowing and weightlifting were among the disciplines with the highest number of doping tests. Approximately two-thirds of the tests were conducted in-competition, while one-third were conducted out-of-competition. It should be noted that some of these out-of-competition tests were conducted outside Japan, to take the shorter duration of the athletes’ stay in the Olympic Village into account.