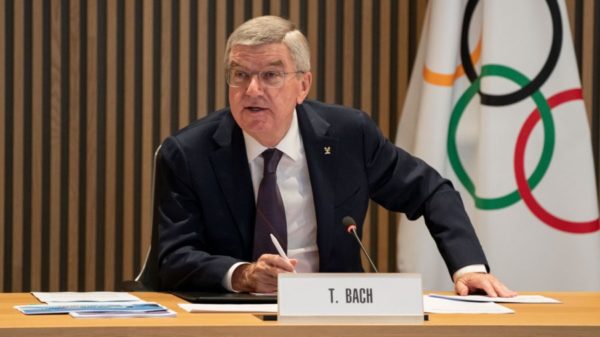 One issue chases another in the Olympic movement. Just yesterday, the debate revolved around the merits of the suspension of Russian and Belarusian athletes from international competitions. Should they be reinstated? Opinions differed.

Today, the question has become simpler. It now boils down to a single question: when? When will the Olympic movement, under the impetus of the IOC, lift its suspension and open the door to the athletes from Russia and Belarus?

Thomas Bach explained in a press conference on Wednesday 7 December, at the end of the third and final day of the IOC Executive Board meeting: the time has come to “explore ways” to reintegrate Russian and Belarusian athletes. With less than 600 days to go until the Paris 2024 Games, it’s time to find a way to get them back in the race.

“We need to explore ways to overcome this dilemma, about the participation of athletes, to go back to sporting merits and not political interference,” Thomas Bach announced.

In the short term, the wheel will continue to turn in the same direction. The IOC explains that the question mobilised the members of the Executive Board for four hours this week in Lausanne. The result was a joint decision to maintain sanctions against Russia and Belarus.

But the door may soon open. “We had to act against our own values,” Thomas Bach continued, “by doing what we have never done and never wanted to do, which is to prevent athletes from competing solely because of their passports.”

The IOC president reiterated on Wednesday that the decision had been taken “with a heavy heart“. He spoke again of the “dilemma” of such a position. A familiar refrain. But Thomas Bach declined to suggest a timetable for the return of Russian and Belarusian athletes to international competitions. “That requires further consultations and they are ongoing,” he summarised. So there is no fixed date.

The issue will be discussed again on Friday 11 December at the Olympic Summit organised by the IOC in Lausanne. Stanislav Pozdnyakov, President of the Russian Olympic Committee (ROC), will be one of the guests. If his latest statements are to be believed, the former fencer should not remain silent when the subject is put on the table.

By coincidence, the last day of the IOC Executive Board meeting was held on Wednesday 7 December at the same time as a meeting of the ROC Executive Board in Moscow. Stanislav Pozdnyakov chaired the meeting. Before answering questions from the Russian media.

Interviewed by Match TV, he explained that the different scenarios for the return of Russian athletes to international competitions were being studied. Russia is preparing. It is already in the starting blocks.

“The priority scenario for us is for our athletes to participate in the Paris 2024 Games, after going through the qualification process,” explained Stanislav Pozdnyakov. No one knows what the criteria will be for Russians to return to international competitions. It depends entirely on the IOC and the international federations. But, in any case, the potential participation of the Russian team will involve solving a lot of organisational issues. We will have to face challenges related to logistics, bank payments, obtaining visas… But we are ready to meet them.”

Paris 2024, then. The priority target. But the president of the ROC makes no secret of the fact: the option of a later return, incompatible with the upcoming Olympic qualifications, cannot be ruled out.

“The second scenario is that full participation of Russian athletes in the Games, without any restrictions, would take place in 2026 at the earliest,” he suggests. “But we have developed a brand new programme to prepare our elite for such a date. Its goal is to train a new generation of Russian athletes in Olympic sports to enter the top three in the medal standings at the Los Angeles Games in 2028. To achieve this, the ROC now has all the necessary resources.”

Stanislav Pozdnyakov was surprisingly forthcoming and said that he had recently spoken to Thomas Bach and a number of international sports leaders. “I haven’t met a single one of them who told me they didn’t want Russian athletes in major competitions,” he says. “Of course, there are some contrary voices in radical countries, where governments see confrontation and division as something that can serve their interests. But this is a small minority.”