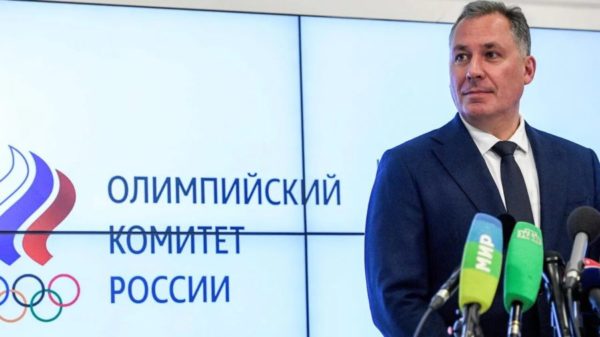 Two speeds. Since the beginning of the invasion of Ukraine by the Russian army last February, the IOC has been moving at two speeds. It recommends that international federations close the door to Russian and Belarusian athletes. But at the same time, it is opening its door wide to their leaders.
On Monday 5 December, this questionable position took on a spectacular dimension. By a coincidence of timing, the executive committee of the body was meeting at the Olympic House for the last time this year. It discussed the Russian issue. On the same day, the IOC sent the media a long press release announcing the date, the programme and, above all, the guests for its next Olympic Summit. Russia will be there.
Mark Adams, the IOC spokesman, explained at a press conference on Monday, at the end of the first day of the Executive Board meeting: the time has not yet come for the Olympic movement to lift the sanctions against the two warring countries. “This is not the time to lift the sanctions against the Russians or the Belarusians,” he said. “The sanctions remain in place.” So there is no question of allowing athletes from the two nations to participate in international competitions.
At the same time, the IOC has posted the list of guests for its next Olympic Summit. It will be held on Friday 9 December in Lausanne and will be the first one in face-to-face mode since the beginning of the COVID-19 pandemic. On the agenda are several “topics of interest“, including the review of the Beijing 2022 Winter Games, preparations for the Paris 2024 Games, the race for the 2030 Winter Games, Olympic qualifications, the future of the Olympic Esports Series, and the fight against doping. Copious.
The cast promises to be prestigious, with around thirty guests gathered around Thomas Bach for the day. In the first circle, the four IOC Vice-Presidents, Ng Ser Miang, John Coates, Nicole Hoevertsz and Juan Antonio Samaranch. One row below, two other members of the Executive Board, Emma Terho from Finland for the Athletes’ Commission, and Nenad Lalovic from Serbia. A handful of international federation presidents are also invited, including Gianni Infantino for FIFA, Husain Al-Musallam for FINA, Sebastian Coe for World Athletics and Luc Tardif for the IIHF.
Other guests included Pierre-Olivier Beckers from Belgium, president of the coordination commission for the Paris 2024 Games, David Lappartient from France, president of the UCI and also in charge of the liaison group on electronic games, Andrew Parsons from Brazil for the IPC, Witold Banka from Poland for WADA and Valérie Fourneyron from France for the ITA. In short, a very fine group.
True to form, the IOC President also invited the presidents of three National Olympic Committees, supposedly the most powerful in the world: Gao Zhidan for China, the American pairing of Susanne Lyons and Gene Sykes for the USOPC and, lastly, a surprise, Stanislav Pozdnyakov for Russia (photo above)
On Monday 5 December, the IOC reiterated that the sanctions against Russia would be maintained, including the suspension of athletes from international competitions, and announced that it had invited the President of the Russian Olympic Committee (ROC) to participate in a Summit where the present and future of the movement would be discussed.
Will Stanislav Pozdnyakov be content to remain silent? Last October, his appearance at the General Assembly of the Association of National Olympic Committees (ANOC) in Seoul caused some embarrassment. The representatives of the Danish Olympic Committee even left the room when he presented the report of the Education and Culture Commission, of which the former Russian fencer is the chairman.
It would be surprising if his presence, real or virtual, emptied the room at Olympic House on Friday 9 December for the IOC Summit. But the Russian press is not mistaken: Stanislav Pozdnyakov will be given the opportunity to speak. “Russia’s participation may give Pozdnyakov the opportunity to discuss the blanket bans imposed on his country’s athletes following an IOC recommendation in February due to the conflict in Ukraine,” suggests the Russian website RT.com.