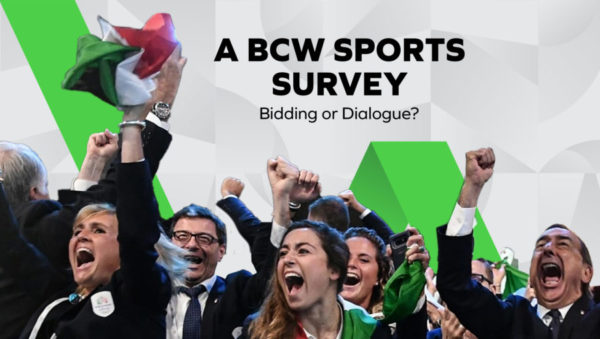 Bidding or dialogue? The question has become very fashionable in the international sports movement. Three years after the IOC made a dramatic shift in its selection process for the host cities of the Games, the debate remains open. But a vast survey published on Tuesday 29 November provides several answers.

The survey was conducted by the BCW Sports agency, the sports subsidiary of the global communications and public relations giant BCW (Burson Cohn & Wolfe). The survey questioned 100 cities around the world that are said to be “active” in the quest for international sports events during the fourth quarter of 2022. The central question was: would you prefer to go through a classic bidding campaign, concluded by a vote, or follow the steps of a dialogue process?

The result is not unanimous. Both options have their supporters. But the BCW Sports poll shows three trends.

The first may be surprising. Nearly 80% of respondents agreed that the selection process had a high or medium influence on their decision to go for it. Clearly, the vast majority of potential candidates for hosting a major sports event find out about the rules of the game before taking the plunge.

Furthermore, almost one in two respondents explained that a negative experience in a previous bid had led them to give up trying again for the same event. This response suggests that those who were defeated are more likely to attribute their failure to the decision-making process than to their own dossier.

The second lesson is that the cities are increasingly in favour of the dialogue process. More than half (56%) admit that they prefer this option to a hard-line bidding campaign. However, many of them argue that the current forms of dialogue proposed by the international bodies should be improved. They are particularly critical of the lack of clarity and transparency in the timetable and decision making.

The BCW Sport survey does not mention it, but the last Olympic award by the IOC, for the Summer Games in 2032, could in itself illustrate all the reservations put forward by the cities questioned. Half a dozen countries were in the running, including Qatar, Germany, India, Indonesia and South Korea. Australia and Brisbane won the bid. The IOC Executive Board initially chose them as the only ones to continue the dialogue. The Session then settled the matter on the sidelines of the Tokyo 2020 Games. The other applicants followed the soap opera from a distance, sometimes discovering the episodes without knowing in advance when they would be broadcast.

The final lesson of the survey is that cities want clarity, consistency and transparency in the selection process. It does not matter whether it is a dialogue or an application, they want a procedure and a final choice that are neither obscure nor flawed. They want to know all the rules of the game, including when the decision is made and who makes it.

In the wake of the IOC, several international sports federations have chosen to favour a process of dialogue, with a call for expressions of interest, followed by a phase of exchanges and discussions, and finally the announcement of the city or country selected. World Rowing, in particular, has made this shift. So has the UCI.

The Commonwealth Games Federation (CGF) awarded the 2026 edition of the multi-sport event to the Australian state of Victoria after a similar procedure. But it did so by default. Its first bidding campaign, in a more old-fashioned format, ended in deadlock. One after another, the potential hosts of the Games had all given up.