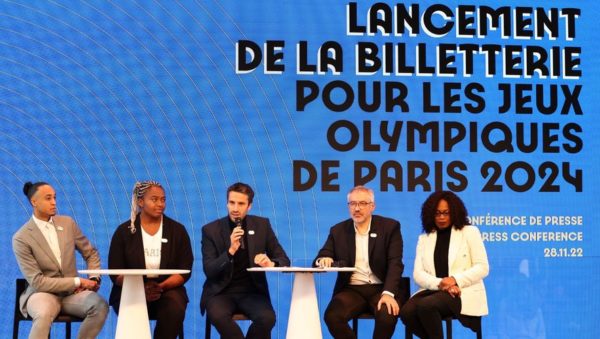 Here we go. Or almost. The Paris 2024 OCOG announced it on Monday 28 November, during a press conference organised at the Eiffel Tower: the ticketing rocket for the next Olympic Games will be fired on Thursday 1 December. 603 days before the opening of the event.

The beginning of the ticket race. But a deceptive start. This first phase, which will last for two months, is in reality a registration for a draw. A warm-up, therefore, before the real launch of the sale, planned for mid-February next year.

All applicants for tickets to the Olympic events, in France as in the rest of the world, will have to register online on the official and unique ticketing platform: tickets.paris2024.org. They will be able to do so between 1 December at 11am local time and 31 January 2023. However, there is no need to rush in the hope of being among the first to enter the platform. The date of registration will have no effect on the draw.

This first stage is intended to be simple and without constraints. According to the organisers, the entire process can be completed in just three minutes. No payment is required.

At the end of this registration phase, the OCOG will draw lots among all registered Internet users, whether French or foreign. The OCOG will then give the selected candidates a 48-hour “purchase window” for the second phase of the operation, the sale of tickets in packs. It will begin on 15 February 2023, but the first four days – 15 to 18 February – will be reserved for members of the Paris 2024 Club. Today, there are about one million members.

How many will try their luck in the draw? When asked by FrancJeux, the spokesperson for the Paris 2024 OCOG, Michaël Aloïsio, acknowledged that he had made projections, but refused to communicate the estimates. The only thing that is almost certain is that this first phase will result in disappointment, as the number of registrations is expected to exceed the number of people drawn.

What happens next? The candidates selected at random will receive an email from the OCOG informing them of the date and time of their purchasing window. This will last 48 hours. An important note: the message inviting them to enter the virtual shop to do their shopping will be sent only 48 hours in advance. In other words, a lack of response at the time of the opening of the sales phase on 15 February will not be synonymous with failure in the draw.

The advantage of the formula chosen by the OCOG, which is still unprecedented at the Olympic Games, is that it avoids the inevitable bottleneck of the platform at the time of its opening, and above all allows buyers to make their choice according to the actual offer at the time of their slot.

This first phase of ticket sales, from 15 February 2023, will only concern packs of three tickets. They will be freely combinable, à la carte, but with a maximum of 30 tickets per buyer, and six seats per session. All sports will be offered, except for surfing in Tahiti, for which no ticketing is planned. In total, there will be over 600 competition sessions.

A minimum of 72 euros will be charged for a three-pack of tickets, with the organisers offering a very large number of places from 24 euros. At the other end of the scale, the most expensive combination is advertised at €1,150.

As the OCOG points out, not all tickets for the Olympic Games intended for the general public will be available in this first sales phase. It will concern 80% of the contingent, i.e. about 3 million seats out of the 10 million available. The rest, the most sought-after sessions – some of the finals in athletics, swimming and gymnastics, the medal matches in team sports, the opening and closing ceremonies – will be offered individually in the second ticketing phase. It will begin in May 2023 and, like the first phase, will be preceded by a draw.

In all cases, the OCOG teams will monitor purchases remotely, in real time, in order to adapt the offer to the reality of demand. This will enable them to regulate the number of buyers to be brought into the online shop at the same time. And, above all, to decide when to close the platform. “The sale will stop when the packets are no longer attractive,” explains the OCOG.

In parallel with the ticketing operation set up by the OCOG, a quota of tickets has been allocated to On Location, the IOC’s exclusive partner for the Olympic Games hospitality programmes. It concerns tickets “with services“, including travel, transfers and accommodation.