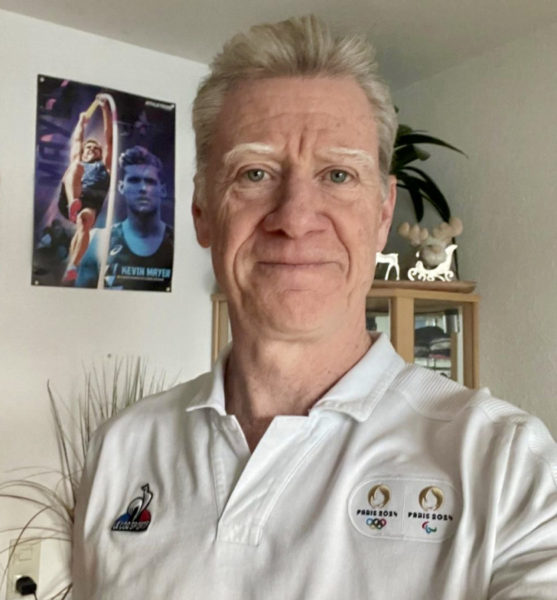 Athlete, coach, media consultant, organiser… Alain Blondel, 59 years old, has experienced everything about high-level athletics and the Olympic Games. The former French decathlete, European champion in Helsinki in 1994, joined the Paris 2024 OCOG before the Tokyo 2020 Games. FrancsJeux continues its series of interviews with the sports managers of the organising committee.

Alain Blondel: Before joining the Paris 2024 OCOG, I was co-organiser of the Diamond League athletics meeting in Rabat, Morocco, and the Karlsruhe indoor meeting in Germany. At the same time, I was working with the French Athletics Federation (FFA) as a consultant on the service and technical activities for the Pro Athlé Tour meetings in Sotteville, Marseille and Nancy. I also had an activity in the media, as a consultant for athletics on RTL for almost 25 years.

I counted: I participated in eight editions of the Summer Olympics, between Seoul 1988 and Tokyo 2020. The first two as an athlete, in the decathlon. After an absence at the Atlanta Games in 1996, I went on to participate in five editions as a media consultant, mainly with RTL, but also for Canal + at the Sydney 2000 and Athens 2004 Games. Finally, I played a very different role at the Tokyo 2020 Games, where I worked on athletics with the Japanese organisers for the Paris 2024 OCOG.

The renovation of the athletics track at the Stade de France. And the choice of its colour. It represents 13,000 m2. You have to anticipate a lot of things and integrate many parameters. Not an easy task. The track is at the top of my list, but with four different competition sites, there are many subjects. And everything is moving forward at the same time.

The athletics venues: their assets, the challenges in the perspective of the Games?

The Stade de France has a very strong history and image. This is a huge advantage. We are not starting from scratch. It remains the showcase of French sport, marked by the 1998 World Football Championship and the victory of Les Bleus, then the World Athletics Championships in 2003, the French rugby team… But it will be over a quarter of a century old by the time of the Paris 2024 Games. It no longer really meets the standards of an event like the Olympic Games. Technically, it has become limited. We will have a big job to do, with a reduced timeframe because the stadium will also be used for rugby 7s, before the start of athletics. We will have to get into the athletics configuration before we even have the venue, with a lot of details to work out so that we don’t miss the transitions from one sport to the other. The Paralympic Games will also be a challenge on the technical side. The long jump pit, for example, is not wide enough for visually impaired athletes. The other three athletics venues, for walking and marathon, will be very different as they are located outside the stadium. A safe environment will have to be built on the public highway, with heavy constraints. But the Olympic marathon course, between Paris and Versailles, is exceptional. It has a unique history and philosophy. The walking loop, at the Trocadero, is also exceptional. Finally, the Paralympic marathon, which starts in Seine-Saint-Denis and finishes in Paris, will bring the Games to a close by linking the department and the capital.

Paris 2024 will be a success for athletics if…

We will have succeeded if every athlete leaves the stadium or the course with a smile on their face and stars in their eyes. In athletics, the Olympic Games represent 1,810 athletes, plus 1,070 for the Paralympic Games. The competition will disappoint some of them, that’s the nature of sport. But if they finish with a smile on their face, it will mean that we have put them in a position to realise their dream.