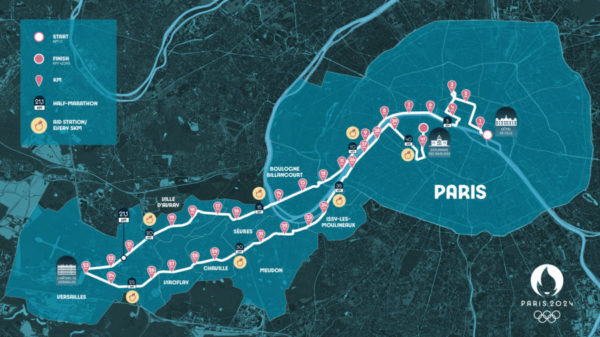 Symbolic? Not only. Athletic, above all. On Wednesday 5 October, the Paris 2024 OCOG unveiled the marathon course for the next Olympic Games like a jewel. It has been designed with the ambition to “tell a story“, as the organisers put it. But the athletes will have little time to listen to the story. The route is terribly demanding and will require their full attention.

A story, then. It goes back to the Revolution. The women’s march on Versailles, on 5 and 6 October 1789. Nearly three months after the storming of the Bastille, several thousand Parisian women gathered in Paris, demanding bread and weapons, before marching to the Château de Versailles to bring Louis XVI and his family back to the capital.

Under pressure from the people, the king relented and repatriated his trunks and court to Paris. He then ratified the Declaration of the Rights of Man and the principle of the Constitution.

Alain Blondel, the athletics manager at the Paris 2024 OCOG, explains: the Women’s March of 1798 served as “inspiration” for the route of the next Olympic marathon. An inspiration, nothing more, as the precise route of the revolutionaries has always divided historians.

The start will be in front of the Hôtel de Ville in Paris. The marathon will then follow the banks of the Seine for several kilometres, before branching off to the west, crossing the Hauts-de-Seine department at Boulogne-Billancourt, Sèvres, Ville-d’Avray, before heading towards the Château de Versailles. So much for the outward journey. On the way back, what will be left of the 80-strong peloton will pass through the Hauts-de-Seine – Viroflay, Chaville, Meudon and Issy-les-Moulineaux -, before entering the capital, following the Seine and crossing the finish line on the esplanade des Invalides.

The route looked like a postcard, with a passage in front of the Bourse, the Opera, the Eiffel Tower, the Trocadero, the Louvre and of course the Château de Versailles. But the impression is deceptive: the Olympic marathon will be nothing like a tourist walk.

Of course, the difference in altitude between the start – +34m at the Hôtel de Ville, +36m at Les Invalides – seems insignificant. But the reality of the route tells a different story, one that is much less smooth: a positive difference in altitude of 438 m, and a negative one of 436 m. Several passages are very difficult, including the Côte des Gardes in Meudon (+13%), used every year by the Paris-Versailles race.

Alain Blondel admits that the course was not designed with the ambition of favouring chronometric performances. “The logic is different, we are not looking for times,” he says. “The time references will no longer have any meaning, but this race will really see the three strongest men and three strongest women emerge on the day”.

For the athletes and their coaches, preparing for the Olympic event will be a headache. They will have to work from a blank page, without being able to test the course in advance. The OCOG has made it clear that there are no plans to organise a test event for the marathon before the Paris 2024 Games. One shot, one time. Without a second chance.

Another clarification, already announced when the event-by-event programme was presented: the women’s Olympic marathon will be run on Sunday 11 August, the last day of the Games, the day after the men’s race. This is a first.

In both cases, the spectator stand for the archery, whose events will have been held earlier at Les Invalides, will be used for the public in the finish area. It will be able to accommodate around 7,000 people.

So much for the elite. The Olympians. But the OCOG had announced it long ago: a marathon for all will be organised alongside the Olympic event, on the same course. It will be enhanced by a 10km race.

In both cases, the same number of bibs: 20,024. Three thousand of them have already been distributed. The others will be distributed in successive batches until the Games, mainly via the Paris 2024 Club. But only two thirds are intended for the general public. The rest will go to a still vague contingent of personalities and athletes.

There is one unknown: the date and time of these two mass events. The OCOG admits that it is still working on the question. But it is certain that they will not take place after the end of the Games on Sunday 11 August 2024.