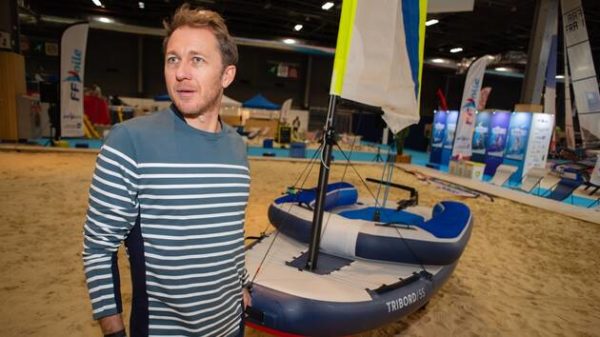 Heading for Marseille and the Mediterranean. After rowing, table tennis, swimming, skateboarding and BMX, then gymnastics and goalball, FrancsJeux continues its tour of the Olympic and Paralympic disciplines of the Paris 2024 Games. Every other week, the organising committee’s sport managers have their say. Nicolas Novara, in charge of sailing, was interviewed.

Nicolas Novara: My career can be divided into three phases. First of all, I was a high-level athlete, in Olympic sailing. I sailed the 470 in the French team. I stopped my sporting career at a relatively young age, at 25, to start studying sports coaching. I became a sailing coach. In Switzerland, with the national team, then in France, for the French Sailing Federation (FFV). After ten years and two Olympic experiences, I wanted to start a new career. I went back to school to study for a second year of management in sports events. Then I joined the Decathlon group, where I was in charge of the Tribord brand, working on various sports, commercial and event-related projects. I stayed there for three years before joining the Paris 2024 OCOG at the end of 2021.

What is your past experience of the Olympic Games?

I took part as a coach, with the Swiss team, in the Beijing 2008 and London 2012 Games. In Beijing, I was the national coach of the women’s team. In London, I was in charge of the boys. Two different but very rich experiences, lived outside the Olympic city. London 2012, in particular, left its mark on me. Even today, in my position as sports manager for Paris 2024, I often refer to these British Games.

Do you have any special memories of the Games?

I have two. The first is from the 2008 Beijing Games. We were not able to attend the opening ceremony, but I marched with Switzerland at the closing ceremony. It was a very emotional moment, in a stadium with 100,000 seats. Very euphoric. The Games were over, the pressure was off. I understood how athletes could transcend themselves in such a context. My second most important memory is the London 2012 Games. I felt more mature, more ready to perform. But, at the same time, I felt very apprehensive because the Games remain a totally separate event. It made me wonder if you could really be ready for the Olympics.

The file at the top of the pile on your desk?

The sailing test event, scheduled to take place in Marseille from 7 to 16 July 2023. We will be the first on the list, the first test event of the Paris 2024 Games. And we will deliver this competition ourselves. It is a very big event in terms of its size, comparable to the Games in terms of the number of athletes, the classes of boats and the format. More than a test event, we are going to organise a dress rehearsal for the Olympic regattas. We will have to be up to speed and already operational.

The sailing site, in the harbour of Marseille: its assets, the challenge in the perspective of the Games?

There are many assets. A very beautiful site, with a varied water surface in terms of wind and weather conditions. Very interesting for the athletes. In addition, Marseille has solid experience in hosting major sailing competitions, especially Olympic ones. The city has organised the America’s Cup qualifiers. Finally, the site is very suitable for the show. It is surrounded by coastline, hills, mountains… This setting will provide some pretty crazy opportunities for spectators. But the challenge lies in its distance from Paris. Three hours by train. We’ll have to make it exist and promote it. We also want to offer a sailing event that breaks with what is done in our sport. A sustainable, responsible and innovative event. Sailing requires a lot of logistical and mechanical resources. We want to innovate by presenting a more responsible model.

Paris 2024 will be a success for sailing if…

We have two ambitions. The first is the most immediate: to fully satisfy the athletes and spectators. Paris 2024 will be a success for sailing if the competitors leave with stars in their eyes, and if the spectators have discovered a site and a discipline. In terms of legacy, I would like these Games to contribute to making sailing more popular and accessible, in France and abroad. And that they establish Marseille as one of the world’s sailing capitals, on a par with Sydney, San Francisco or Auckland.