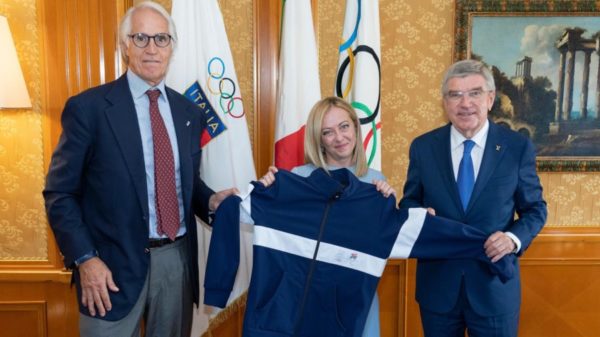 Thomas Bach has a taste for Italy. It is understandable. On Thursday 29 September, the IOC President made his second trip to Rome in just two weeks. The first, an invitation from the National Olympic Committee (CONI) to be decorated with a medal, was planned in advance. The second was much less so.

Just four days after a parliamentary election that tipped Italy to the far right, Thomas Bach travelled to Rome to meet Giorgia Meloni, who is set to become the country’s first female prime minister. A photo immortalised the scene (above). An IOC press release made the nature of the discussions official.

The meeting lasted an hour. Thomas Bach was accompanied by Giovanni Malago (on the left in the photo), the president of CONI and of the Organising Committee of the Milan-Cortina 2026 Winter Games.

Four days, then. Thomas Bach’s eagerness to make this express return trip between Lausanne and Rome may come as a surprise. Giorgia Meloni is not yet officially Prime Minister, even if her coalition’s victory in the legislative elections ensures her a solid majority in the Chamber and Senate. The IOC President could have waited.

But Thomas Bach knows it and is no longer hiding it: with less than four years to go before the 2026 Winter Games in Milan-Cortina, preparations are already taking on the appearance of a sprint race. An obstacle course in which the slightest prolonged slowdown can spell disaster.

The IOC explains in a press release: “The most important item on the agenda for this meeting was the Milano Cortina 2026 Winter Olympic Games”. Four days after the victory of the coalition of right-wing parties, it seems doubtful that the Olympic file is at the top of Giorgia Meloni’s list of priorities. However, the Italian leader reportedly assured Thomas Bach that the Games are “extremely important for us. Italy is more than capable of organising magnificent Games and we are keen to impress the world again. You can count on us.” Cool.

In return, Thomas Bach thanked the Italian leader for the “unwavering support she has given to sport and the Olympic movement for many years.” Ah well. He continued, “We pledge to cooperate closely and in full confidence to make the Milano Cortina 2026 Olympic Winter Games a resounding success for Italy and for the entire Olympic movement.”

With less than four years to go, Milan-Cortina 2026 will not only need the help of Thomas Bach and the IOC to avoid going off course. Above all, the organisers will have to be able to count on the Italian government’s assertive and lasting support. In a country where finishing a government term is often a miracle, this is a major challenge.

Since the Olympic flag was handed over last February in Beijing, Milan-Cortina has only attracted three private partners, Esselunga, Randstad and Deloitte Italia. Delays are piling up in the construction of the venues. For at least one of them, the speed skating ring, it has still not been decided where it will be built.

Another grey area is the appointment of a new director general to the organising committee. The departure of Vincenzo Novari has been known for several weeks, but the name of his replacement has still not been decided. It was agreed that it would be wiser to wait until after the legislative elections to make the final choice, as the new CEO would have to be endorsed by the political authorities.

Now that the elections are over, time is running out. As Giovanni Malago acknowledged on Thursday after the meeting with Gorgia Meloni: “The absence of a director general is becoming an urgent problem to be solved.”