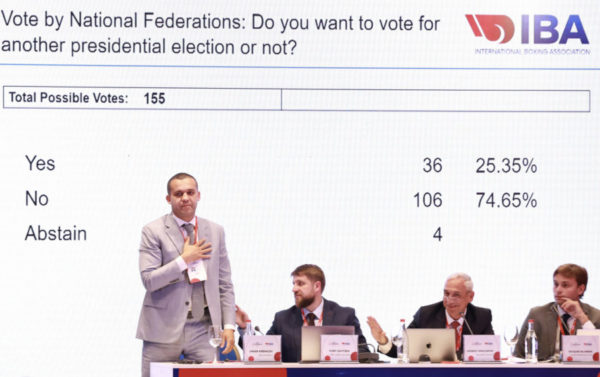 Suicidal. The International Boxing Federation (IBA), which has been sidelined from the Olympic movement for more than three years and is threatened with being left out of the Los Angeles Games in 2028, has taken another step towards taking a giant leap forward. It confirmed, after a clear vote, the Russian Umar Kremlev on the presidential seat.

The IBA’s extraordinary congress, which met at the end of last week in Yerevan, Armenia, had a dream opportunity, perhaps a unique one, to put the house in order. And even, come on, to find grace in the eyes of the IOC.

With the last presidential election invalidated, its members could put the Umar Kremlev episode behind them. And to choose a president with a less suspicious nationality and background for the Olympic body to lead the team between now and the Paris 2024 Games.

It was a great opportunity. But it will go down in the tumultuous history of Olympic boxing as another missed opportunity.

On Sunday 25 September, Umar Kremlev (pictured above, standing) retained his place. Boris van der Vorst, his Dutch rival, who was reinstated by the Court of Arbitration for Sport after being unfairly excluded in the initial election last May, did not carry much weight. However, his victory would undoubtedly have reassured the IOC. And, by a domino effect, it would have given boxing’s Olympic future a boost.

As things never happen the same way in the boxing world, the extraordinary IBA congress was not asked to choose between Umar Kremlev and Boris van der Vorst for the position of president. Too simple, no doubt. The delegates were asked to decide, by vote, whether to hold new elections.

The answer left little room for doubt. Of the 146 national federations eligible to take part in the vote, 106 said no, a result of 75%. In the opposite camp, only 36 countries voted in favour of holding new elections. Four delegates abstained.

Boris van der Vorst was not presented as a candidate for the presidency and did not have the opportunity to defend his chances, his programme and his vision for the future of the IBA. The Dutchman was supported by several Western federations, including the USA.

With such a result, and such an undemocratic election procedure, the future of boxing within the Olympic movement looks bleaker than ever. Shortly after the result was announced, the IOC issued a short statement saying it was “extremely concerned“.

The Olympic body has been repeating for months its doubts about the reforms undertaken by Umar Kremlev, particularly in terms of governance and arbitration. It also insists on the IBA’s financial dependence on its main private partner, the Russian company Gazprom. The IOC considers this dependence to be dangerous for the future of the discipline and its international federation.

As a reminder, the IBA has been suspended from the Olympic movement since June 2019 (it was then known as AIBA). It has lost the privilege of organising the qualification course and then the Olympic tournament, for the Tokyo 2020 Games, but also for the Paris 2024 Games. It no longer selects judges and referees.

More seriously, boxing has been provisionally excluded from the programme of the Los Angeles 2028 Games, as have weightlifting and modern pentathlon. With the election of Umar Kremlev confirmed, it would take a miracle for the IOC Executive Board to reverse its decision.

Umar Kremlev knows this. But the Russian obviously doesn’t care. After the result of the vote was announced on Sunday 25 September in Yerevan, he explained to the delegates via an interpreter that “nobody else should have any influence on the organisation. Nobody can exclude us.”

“I want to send a clear message today,” he said, quoted in a statement from the body. “The IBA is an independent and strong organisation. Our Congress today proved that we are on the right track. I will present a four-year development plan at the Board meeting. I have a clear vision of what we need to do to achieve our goals.”

In Yerevan, the IBA’s suicide operation was not limited to giving full powers to a Russian leader whom the IOC has blacklisted for two years. The body also suspended the Ukrainian Boxing Federation on Friday 23 September, preventing it from taking part in the vote.

The reason given was officially “government interference” in federal affairs. But the Ukrainian federation is paying for its decision to write to the other member countries asking them to vote for new elections and the exclusion of Umar Kremlev.

The IBA no longer recognises Kyrylo Shevchenko as president of the Ukrainian federation. It prefers Volodymyr Prodyvus, known to be an ally of Umar Kremlev. The Ukrainian leader left his country at the beginning of the invasion by the Russian army. He is now vice-president of the IBA.