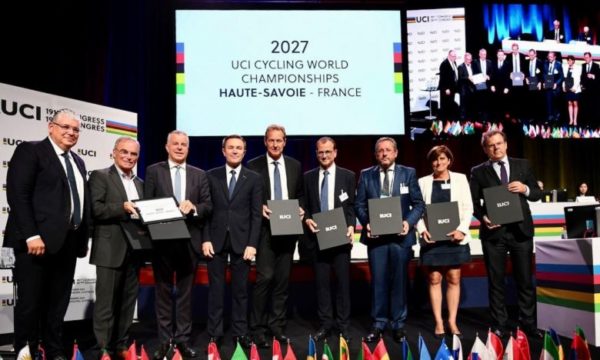 A legacy of Paris 2024? Not yet. But France can rub its hands together: the post-Olympic and Paralympic Games period is not likely to ring hollow in the sporting field.

Meeting on Thursday 22 September in Wollongong (Australia), on the sidelines of the road World Championships, the 191st Congress of the International Cycling Union (UCI) designated Haute-Savoie as the venue for the second edition of the all-discipline world championships in 2027. They will take place from 11 to 26 September 2027.

Two countries were in the running for a 12-day, 19-discipline event, the first of which will be held next year in Scotland: France and the Netherlands. The project submitted by Haute-Savoie was chosen by acclamation and unanimously by the UCI management committee, which met for two days earlier in the week. It was then approved by the body’s congress. A clear victory.

Michel Cadot, president of the French Cycling Federation (FFC), was quoted by AFP from Wollongong as saying: “This is a great satisfaction for French cycling, which will put the spotlight on our sport. My ambition is for it to appear at the same level as a rugby World Cup or a football Euro.”

In recent years, France has hosted a steady stream of world cycling events. In 2022 alone, it hosted the world championships in two Olympic disciplines, track at the Vélodrome national de Saint-Quentin-en-Yvelines and mountain biking at the Savoyard resort of Les Gets. “An asset“, Michel Callot pointed out on the eve of the UCI’s decision.

But you have to go back to the year 2000 to find any trace of a road World Championships in France. The event was held in Plouay, Brittany. Earlier in history, the Haute-Savoie region of France hosted the 1964 World Road Championships. The competition was marked by the victory of the young Eddy Merckx in the amateur category.

In 2027, the road race course will be modelled on the 1980 Sallanches World Championships, an event that is remembered for the identity of its winner, Bernard Hinault (ambassador for the Haute-Savoie 2027 bid), and for the difficult weather conditions. The race was made tougher by the climb up the côte de Domancy (2.7 km at an average of over 8%), which had to be climbed twenty times.

For the rest, the French organisers will have to deal with existing, tried and tested venues (Les Gets for mountain biking), and new facilities. A velodrome and a BMX track are to be built in Reignier-Esery, in the cross-border conurbation of Greater Geneva. The rest of the competition sites will be unveiled in the coming months.

The problem is that the construction of a velodrome, estimated to cost 50 million euros, does not meet with unanimous approval in the region. Several appeals have been lodged by a group of associations and environmentalists. The first on the list has already been rejected by the Grenoble Administrative Court.

The protesters, who are announcing “spectacular actions on the ground” in the coming weeks, consider the project for a facility of this size to be useless and unjustified, even though there is one in Grenoble, in the Isère region. But this historic velodrome, built in 1967, is not approved by the UCI. According to Michel Callot, it is “doomed to destruction”.

The promoters of the project – the French Cycling Federation and the Haute-Savoie department – have planned a joint press conference on 30 September, after their return from Wollongong. “To re-establish the truth because everything that has been said is totally false“, promises the president of the departmental council, Martial Saddier.