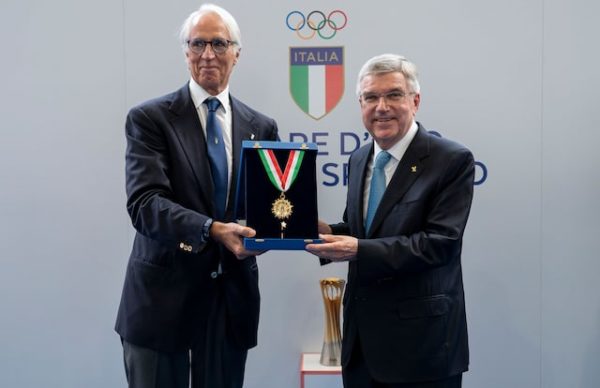 The rules are set in stone and they will not change: Thomas Bach will no longer be IOC President at the 2026 Winter Games in Milan-Cortina. The German leader will have handed over the keys to his office at the Olympic House in Lausanne a little less than a year earlier. But he is still involved in the preparations for the next winter event. And even in the front line.

Thomas Bach was in Italy at the end of last week and, as usual, completed his official visit at full speed. He was presented by Giovanni Malago, the President of the Italian Olympic Committee (CONI), with a distinction reserved only for the great and the good, the Collare d’Oro (photo above). He visited the Afghan and Ukrainian athletes who had taken refuge at the National High Performance Centre in Rome. For the first time in 40 years, he met one of his former fencing rivals, the Italian Carlo Montano.

Above all, Thomas Bach met Mario Draghi, the Italian Prime Minister. Among the subjects discussed was the preparation of the Milan-Cortina 2026 Winter Games. With less than four years to go before the deadline, it is by no means a smooth ride, between the delays and the cost of the work, the difficult search for private partners, the political authorities’ desire to take back control and, the hottest topic at the moment, the search for a new director general for the organising committee.

As a bonus, the holding of national elections in Italy at the end of the month postponed the IOC Coordination Commission’s visit to Milan and Cortina. It was postponed until December. As a result, Thomas Bach has been given the privilege of facing questions from the media about the preparations for the Winter Games in 2026.

The German leader acknowledged: “As always before the Olympic Games, there are challenges, especially in the light of this new emerging world order and the financial and economic crisis. But we have overcome some challenges in the last two years. So I am not too worried because we know the enthusiasm, efficiency and dedication of our Italian friends.”

Cool. But the roadmap of the “Italian friends” has turned into a minefield. The “challenges” mentioned by Thomas Bach are multiplying. Nothing is simple.

First issue: the sites. At the top of the pile was the Cortina d’Ampezzo slope, which was supposed to host the Olympic bobsleigh, luge and skeleton competitions. Long abandoned after having been used for the 1956 Winter Games, it is to be renovated. A budget of over 80 million euros has been released by the public authorities. Expensive. But Thomas Bach explained during his Italian visit that the cost of renovating the track should not be charged to the Milan-Cortina 2026 Games. “This is a tourism and sports project that would have been carried out anyway, independently of the Winter Olympics,” suggested the IOC President.

According to Ivo Ferriani, President of the International Bobsleigh Federation and member of the IOC Executive Board, the legacy of the Cortina track is already in place. It could host the Bobsleigh World Cup as early as the 2026-27 season, and the World Championships the following year.

Another grey area is the speed skating track. The question has not yet been definitively decided, but the option of an outdoor facility, as at the 1992 Albertville Games, is still on the table. The Italians could choose the Baselga di Piné track in the Trentino region. The advantage: lower costs. However, the major constraint is that the map of venues would be even more fragmented. As a reminder, the Milan-Cortina Winter Games are set to be the least compact in history. The venues will cover 22,000 square kilometres, with sites in the regions of Lombardy and Veneto, but also in the provinces of Trento and Bolzano.

In Rome, Thomas Bach also raised the issue of the forthcoming appointment of the Director General of the Organising Committee. Vincenzo Novari, the incumbent of the post, is said to be leaving for sure. But the identity of his successor is the subject of all the rumours and speculation.

The only certainty is that he will not be appointed before the legislative elections, scheduled for Sunday 25 September throughout Italy. A wise decision, according to Thomas Bach. “The new director general must and should have the support of the new government,” he suggested. “It would not be advisable to appoint him now, before the national elections.”