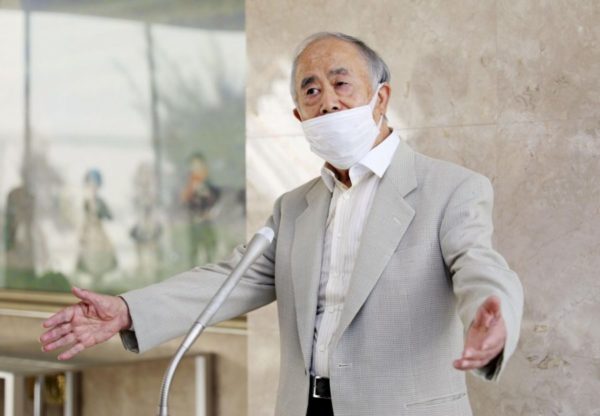 The series is gaining momentum in Japan. Nearly two months after the start of the affair, a new arrest was made on Wednesday 14 September to add to the already rich soap opera of the corruption scandal linked to the Tokyo 2020 Games.

As with the previous arrests, it concerns a highly respected figure in the Japanese economy, a company boss who is almost 80 years old, always elegant and never caught in the wrong way. Tsuguhiko Kadokawa (pictured above), 79, president of the publishing house bearing his name, was arrested Wednesday at his home. He is suspected of being involved in the corruption scandal at the Tokyo Games, where his company was a partner in the organising committee.

Tsuguhiko Kadokawa is accused by Tokyo prosecutors of paying 69 million yen – $481,000 at current prices – in bribes to a consulting firm linked to Haruyuki Takahashi, a former Tokyo board member who was arrested last month in connection with the same investigation.

According to several sources close to the case, the money was paid as a “thank you” for helping the publishing house to be selected by the organising committee as a partner in the marketing programme. The contract was signed in April 2019. Kadokawa Corp had become a sponsor of the Games in the category of “book and magazine publisher”, a status which had notably ensured the design and production of numerous official manuals and guides for the Olympic and Paralympic Games.

Tsuguhiko Kadokawa was not the only representative of his publishing company to be followed by investigators. Two other company executives, Toshiyuki Yoshihara, 64, and Kyoji Maniwa, 63, were also arrested.

The three men allegedly teamed up to ensure the funds were paid, in nine successive transactions between September 2019 and January 2021, to a consulting firm run by Kazumasa Fukami. The Japanese executive, also in his 70s, had not yet been named in the wide-ranging investigation. Like Haruyuki Takahashi, he is a former high-ranking executive of the Japanese advertising and public relations agency Dentsu.

The son of the founder of the publishing house bearing his name, Tsuguhiko Kadokawa denies the allegations. He told the media last week that he was never aware of any bribe. He acknowledges the existence of payments to a consultancy firm, but insists they were for support in his company’s sports strategy.

Founded in 1945 by the current chairman’s father, Kadokawa Corp started out in book and magazine publishing before diversifying into entertainment, notably cinema and the internet.

Tsuguhiko Kadokawa is the second company executive to be arrested in connection with the Tokyo Games corruption case. Hironori Aoki, former president of the men’s suit brand bearing his name, also a partner in the last Summer Games, preceded him last month.

The sequel could move from Tokyo to Osaka, home of the advertising agency Daiko Advertising Inc. It is also suspected of having paid bribes to the consultancy firm run by Kazumasa Fukami.

Question: Will the Tokyo Games corruption drama affect Sapporo’s bid for the 2030 Winter Games? At this stage of the case, there is no sign of it. A recent opinion poll commissioned by a Japanese daily newspaper showed stable and still strong support for the Hokkaido prefecture capital’s bid. It remains above the 50% mark.

The IOC, for its part, took the opportunity of the recent meeting of its Executive Board to assure that the cancellation of the visit to Lausanne by the mayor of Sapporo and the president of the Japanese Olympic Committee, scheduled for mid-September, was in no way linked to the case.

The postponement of the next IOC Session, initially scheduled for 30 May in Mumbai, to the autumn of 2023, puts the choice of the host city for the 2030 Winter Games even further back. The Olympic body could also take advantage of this to also postpone the announcement of the preferred bid, the only one invited to continue the dialogue. By gaining a handful of months, the IOC would allow the Tokyo Games case to be diluted in time. And Sapporo 2030 would regain some colour.