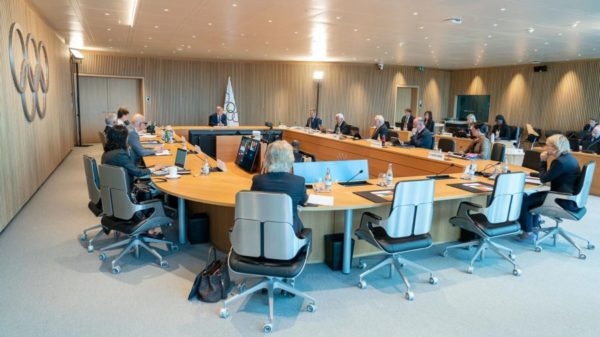 It was going to be a busy day, with an agenda that looked like a gourmet menu. Nine courses, not one less. Meeting on Thursday 8 September in Lausanne for the fifth, and penultimate, time of the year, the IOC Executive Board swept through the topics without losing its breath. It convened a record number of players from the Olympic movement, both good and bad. And at the end of the day, it made a long series of decisions, some of them radical.
The bad pupils, first of all. There are many of them. At the top of the list is a regular at the back of the class, the International Boxing Federation (IBA). On Thursday 8 September, the IOC Executive Board put it through the mill once again. It pointed out the doubts about its governance, especially for the arbitration and judging process, and its financial dependence on the Russian company Gazprom.
Nothing new under the sun. But the IOC explained at the end of the first day of the meeting that the issues “remain relevant“. The body noted in a statement: “It was noted that the IBA had not made real efforts to respect and implement the roadmap established by the IOC Executive Board in December 2021 regarding governance. As a result, the IOC Executive Board sent a letter to the IBA, informing it of the IOC’s serious concerns. At present, boxing is not included in the programme of the Los Angeles 2028 Olympic Games and, in the absence of any real developments, the IOC Executive Board is not in a position to reverse this decision.”
Another bad pupil, also already pointed out: India. On Thursday 8 September, the IOC announced that its National Olympic Committee was under possible suspension. The reason for this was “recurrent internal conflicts and governance problems” at the body. These have delayed the holding of elections, initially scheduled for the end of 2021, but still postponed.
At this stage, the Indian Olympic Committee is only under threat. A “last warning”, according to the IOC, before a possible suspension that could be decided at the next Executive Board meeting in December 2022. India would then no longer be able to participate under its colours in future Olympic events, including the 2024 YOG in Gangwon and the 2024 Paris Games.
In the meantime, it has been decided to postpone the next session, originally scheduled to take place in Mumbai from May 30, to “September/October 2023“. In the event of a postponement, India could even lose the right to organise the session.
As a direct consequence of the postponement of the Olympic movement’s next major event, the host country of the 2030 Winter Games will no longer be decided in the spring, but in early autumn 2023 at the earliest. With such an upheaval in the calendar, the IOC Executive Board will not necessarily decide at its December 2022 meeting which of the potential candidates, between Sapporo, Salt Lake City and Vancouver, will be invited to continue the dialogue alone.
Let’s be clear: the new timetable for the 2030 Winter Games campaign is good for the IOC. For the three bidders, the December deadline had become a race against time. Sapporo, announced as the favourite and long on schedule, has been plagued since last month by the Tokyo 2020 corruption scandal. Vancouver has still not formally decided to enter the battle. And Salt Lake City is still hesitating between 2030 and 2034.
The last bad pupil: Guatemala. The IOC executive meeting decided to suspend its National Olympic Committee as of 15 October. The reason was the decision of the Guatemalan Constitutional Court, “for obscure reasons“, to suspend “a certain number of provisions of the statutes and regulations” of the national body last August.
The problem is that the court’s decision is contrary to the Olympic Charter, which requires National Olympic Committees to “preserve their autonomy and resist all pressures, particularly legal and political”. The Guatemalan authorities have until 15 October to resolve the issue. If not, Guatemala will be excluded as a nation from future Olympic events.

At the other end of the class, among the good students, the OCOG Paris 2024 saw the IOC Executive Board put its seal on the new venue map. The shooting competitions, initially scheduled to take place at Les Essences in La Courneuve, will now be held at the National Shooting Centre in Châteauroux, in the Indre department. The qualifying rounds of the boxing tournament are moving from Roland-Garros, where the finals will be held, to Villepinte in Seine-Saint-Denis. The initial round of the modern pentathlon fencing ranking has also moved to Villepinte.

Basketball, on the other hand, will have to wait. Mark Adams, the IOC spokesman, explained at a press conference that the decision had not yet been made as to the venue for the preliminary phase. The “discussions are very positive”, he said. They could lead to “a decision in the near future”. The refrain is familiar. But months go by.