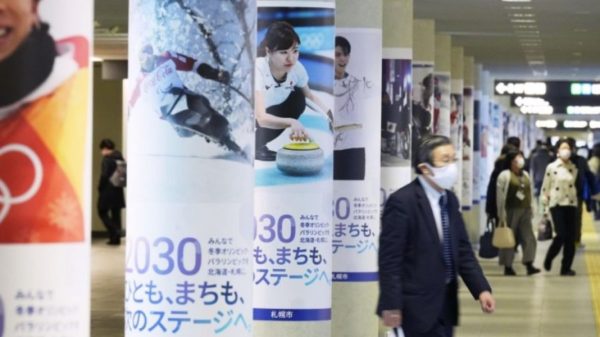 Predictable. The now daily soap opera of corruption at the Tokyo 2020 Games is not only casting a shadow over the last summer Olympic and Paralympic event. It is also affecting Sapporo’s bid for the 2030 Winter Games.

The Japanese city, capital of the Hokkaido prefecture, announced on Monday 5 September that the visit of a delegation of elected officials to the IOC headquarters in Lausanne, scheduled for mid-September, had been cancelled. It was to have been led by the mayor, Katsuhiro Akimoto, and would have taken place before a stopover in Munich, organised from 14 to 17 September as part of the 50th anniversary of Sapporo’s twinning with the German city.

Officially, Sapporo’s decision to draw a line under its visit to Lausanne is obviously not linked to the recent revelations about a corruption scandal involving several partners of the Tokyo Games and a former member of the board of the organising committee, Haruyuki Takahashi. “This has nothing to do with the corruption case surrounding the Tokyo Olympic and Paralympic Games,” the mayor of Sapporo said. The cancellation is said to be the result of a “scheduling conflict” between Sapporo and the Olympic body.

Yasuhiro Yamashita, president of the Japanese Olympic Committee (JOC), explained to the media: “I spoke with the IOC over the weekend. The schedule is not ideal, so we mutually proposed to cancel the visit for this time.” The former judoka was supposed to accompany the Sapporo delegation to Lausanne.

According to Yasuhiro Yamashita, quoted by the Japanese media, the IOC insisted during the conversation last weekend that the Tokyo Games case “was separate from the Sapporo bid”.

But the concordance of the facts does not fool anyone. The visit of the Sapporo delegation to the IOC headquarters had been planned for months. It should have further strengthened the Japanese city’s position as the favourite to win the 2030 Winter Games, in the face of hesitant competition from North America (Salt Lake City in the US and Vancouver in Canada).

But the corruption scandal at the Tokyo 2020 Games comes at the worst possible time for Sapporo 2030. According to a source close to the bid, “the problem was the timing of the meeting. Visiting the IOC now would have only drawn criticism. There was no choice but to make this decision.”

Beyond the fact that the timing of a group visit to Lausanne is now less than favourable, the Tokyo 2020 Games affair is a major blow to the popularity of the Sapporo Olympic and Paralympic project. Last spring, local support for the bid ranged from 57% to 65% in one poll to another. But revelations about bribes paid by official partners to the former head of the Dentsu group are reportedly causing a dangerous shift in opinion.

For Sapporo 2030, the timing is all the more unfavourable as the Tokyo 2020 soap opera is now a daily affair, with new players in each episode. At the end of last week, the Japanese press revealed that the former president of the organising committee (and ex-prime minister), Yoshiro Mori, had also received his envelope.

On Monday 5 September, the investigation pulled a second partner out of the hat, after the company Aoki Holdings, also implicated in the affair. The publishing house Kadokawa Corp, which became an official supporter of the Games in April 2019, is also said to have paid Haruyuki Takahashi for services rendered during the sponsor selection phase.

Later in the day, the Kyodo News agency brought to light a third aspect of the affair. This time it does not directly concern a partner of the Tokyo Games, but an advertising agency based in Osaka, Daiko Advertising. It is alleged to have paid Haruyuki Takahashi the sum of 26 million yen ($185,000), in three instalments. In exchange, the former Tokyo 2020 board member is said to have used his influence to have Daiko Advertising chosen as an intermediary in the selection process of national partners.

At the rate the investigation is going, the next few days could bring a new batch of revelations. This could further damage Sapporo’s bid for the 2030 Winter Games.