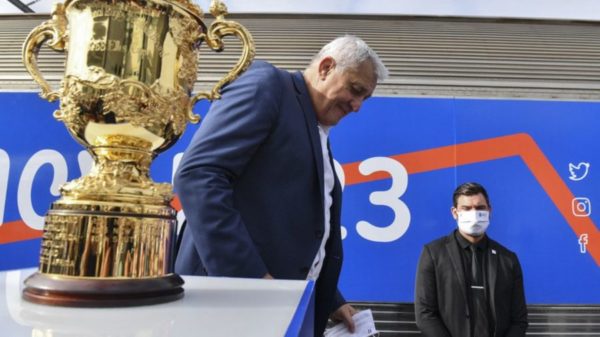 Bad timing. With a year and a handful of days to go, the 2023 Rugby World Cup in France (8 September to 28 October) is in crisis. It has just lost its general manager, Claude Atcher. The Frenchman was sacked on Monday 29 August following a decision by the Minister for Sport, Amélie Oudéa-Castéra.
The ministry’s press release states: Claude Atcher has been dismissed “on a precautionary basis”, with “immediate effect”. But unless there is an unlikely turn of events, the provisional should become definitive. The 66-year-old former third row player, who was already heavily involved in the organisation of the 2007 World Cup in France, will not be taking over the reins of the France 2023 GIP (public interest grouping).
The reason for this is “alarming managerial practices“, according to the Ministry of Sport, revealed in an article in the daily newspaper L’Equipe on 22 June, and confirmed by an investigation by the Labour Inspectorate. According to the ministry, the management by terror of Claude Atcher and his chief of staff had the effect of “altering the functioning of the structure” and plunging a certain number of employees into a “state of suffering”.
The decision by the Sports Ministry, announced early on Monday 29 August, was taken in agreement with the ethics committee of the France 2023 IPG, the French Rugby Federation (FFR) and the French Olympic Committee (CNOSF). It has been approved by World Rugby.
The ministry’s press release states that Claude Atcher “will no longer be present or active, directly or indirectly, within, in the name of and on behalf of the GIP during the entire period of precautionary lay-off.” In other words, he will disappear from the scene.
An exceptional board meeting of France 2023 will be convened on Friday 2 September, “to ratify this precautionary layoff and to validate that the missions of the director general will be carried out by Julien Collette, deputy director general.”
The ministry also announced that it had opened a second investigation. Conducted jointly by the General Inspectorate of Finance and the General Inspectorate of Education, Sport and Research, it aims to “analyse the existence of possible breaches of economic and financial probity or conflicts of interest and, secondly, to support the GIP in the organisation of some of its strategic programmes”. The inspectors will focus in particular on the company car made available to Claude Atcher at the GIP, which several internal testimonies agree was mainly used by his wife.
Proof of the seriousness of the facts: all the parties concerned were quick to support, from Monday evening, the decision taken by Amélie Oudéa-Castéra to get rid of a player who had long been considered essential, but who was now considered undesirable.
The FFR explained that it “fully supports the action plan decided today in consultation with the Ministry of Sport and the president of the France 2023 GIP, Jacques Rivoal”. The national body chaired by Bernard Laporte, a historical ally of Claude Atcher, seems determined to cut ties. “The Federation has based its action on the protection of all its populations, and employees are obviously one of its priorities,” it suggested to AFP.
World Rugby has the same unambiguous position. The body assures that it “fully approves the conclusions and the action plan communicated by the French Ministry of Sport on the subject of the social climate within the France 2023 organising committee”. It continued: “The well-being of the rugby family is paramount and central to the values of unity, inclusion and conviviality that embody the World Cup.”
Question: who will replace Claude Atcher? The ministry has chosen to be cautious, trusting the number 2 of the organising committee, Julien Collette. He has been asked to act as interim manager, but could also change the provisional into the definitive. Martine Nemecek, the director of the tournament, who was at the 2003 World Athletics Championships in Paris-Saint-Denis and then at the 2007 World Rugby Championships, should also move up a notch.
With one year to go before the opening, finding a successor to Claude Atcher outside the organising committee is not going to be an easy task. Etienne Thobois, who held the position at the 2007 Rugby World Cup in France, would have ticked all the boxes. But the Frenchman is not free, as he is the director general of the Paris 2024 OCOG.
Whether by chance or not, Claude Atcher’s dismissal comes just a few days before the opening of the trial in Paris on 7 September on suspicions of favouritism surrounding the marketing of the French rugby team. Claude Atcher will appear in court on charges of concealment of breach of trust, misuse of corporate assets and concealed work by concealment of activity. He will be joined in the dock by the president of the FFR, Bernard Laporte, and the owner of the Montpellier club, Mohed Altrad.