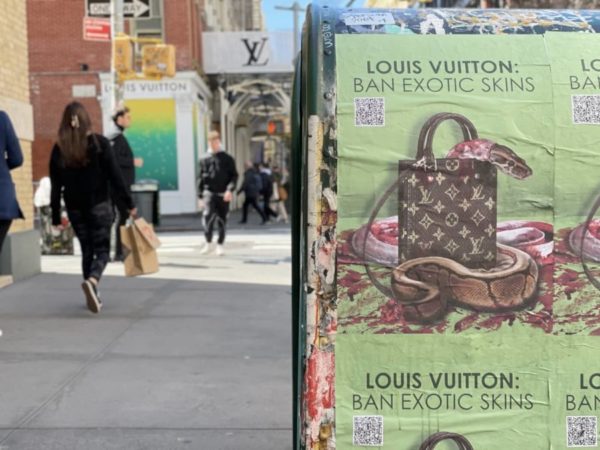 Not yet in place, but already unwelcome. Less than two years before the Paris 2024 Games, an alleged partner of the organising committee has been singled out by an international animal rights organisation. With the IOC in the role of witness.

The American organisation PETA (People for the Ethical Treatment of Animals), the world’s largest animal rights organisation, with 3 million members, has announced that it has written a very official letter to Thomas Bach. It is asking the IOC president to intervene in the negotiations between the Paris 2024 OCOG and its presumed future premium partner, LVMH (Moët Hennessy Louis Vuitton).

This is not a common approach. Admittedly, the name of the French group owned by billionaire Bernard Arnault is regularly mentioned as the next of the Paris 2024 OCOG’s top partners. But its arrival at the top of the pyramid has not yet been made official. PETA therefore wants to take the lead, bringing the IOC and its president into the loop.

“In response to reports that LVMH – parent company of Louis Vuitton and Fendi – is poised to become an official sponsor of the Paris 2024 Olympics,” writes the Virginia-based NGO, “PETA today sent a letter to International Olympic Committee President Thomas Bach, urging him to give the green light to LVMH’s sponsorship only if the luxury giant commits to stop selling fur and exotic skins, as the production of these items is not only excruciatingly cruel to animals, but also poses a significant risk of triggering a new zoonotic pandemic. “

The letter is signed by Mimi Bekhechi, PETA’s vice president. “LVMH has so far failed to act responsibly and continues to endanger public health with its mink coats and python bags,” suggests the Briton, who is responsible for the UK, Europe and Australia. “We all know the terrible impact that COVID-19 has had on billions of lives around the world, so it would be wrong for the next Olympic Games to be sponsored by a company that supports these dangerous industries.”

The US organisation explains that outbreaks of COVID-19 affecting animals and workers have occurred on fur farms in several countries, including France, Denmark, Italy, the Netherlands, Spain, Sweden and the US.

PETA reveals that its Asian branch has conducted an investigation into two Indonesian slaughterhouses that supply LVMH. It shows workers beating pythons on the head, then hanging them up and ramming hoses down their throats to inflate them with water, “making it easier to remove their skin”. The same PETA Asia survey claims that rabbits were clubbed and chinchillas electrocuted for their fur.

Finally, the American NGO points out that several other luxury industry brands, including Chanel, Burberry, Calvin Klein and Victoria Beckham, have banned fur and exotic skins from their collections.

The PETA case is reminiscent of another. In June 2019, the Total Group withdrew from joining the marketing programme of the Paris 2024 OCOG. The oil and gas giant was announced as a premium partner of the Olympic and Paralympic event, with a contract estimated at more than €100 million.

But its CEO, Patrick Pouyanné, threw in the towel after a meeting in late May 2019 with Anne Hidalgo. The contract seemed almost signed. But the mayor of Paris vetoed it. She wrote to the OCOG to remind them that the Paris 2024 Games should be “exemplary” in terms of respect for the environment. “It would be very difficult for our fellow citizens to understand that companies whose activities would have a heavy impact on the environment, based in particular on the massive use of carbon-based energies, would be selected,” Anne Hidalgo had suggested in her letter to Tony Estanguet.