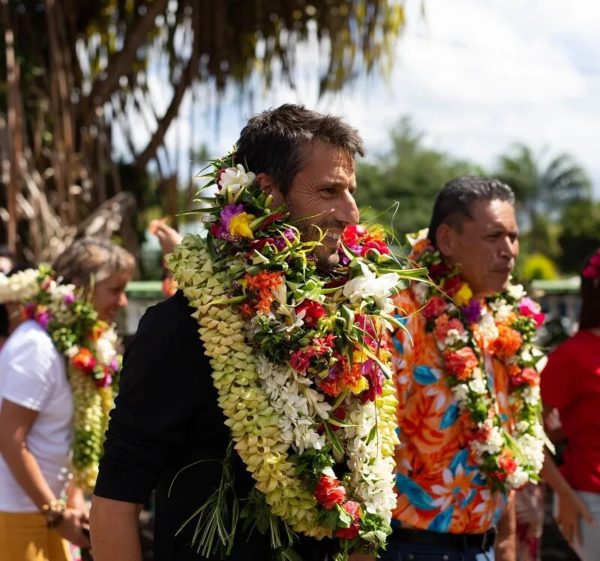 The deal is done. Tony Estanguet packed his suitcase and left Tahiti on Wednesday 17 August, at the end of a six-day visit to French Polynesia. Direction Paris.

In his luggage, the president of the Paris 2024 OCOG is not only bringing back an elegant but perishable collection of flower necklaces. Above all, he brought back the official agreements for the organisation of the Olympic surfing events on the Teahupoo wave, one of the four additional sports at the next Summer Games.

The three precious documents were signed on Tuesday 16 August by Tony Estanguet, representatives of the State and Edouard Fritch, the President of French Polynesia. The signing ceremony was symbolically organised at the headquarters of the Tahitian Surfing Federation in Papara, in south-west Tahiti.

The first agreement was signed with Polynesia. It specifies in detail the infrastructures to be provided on the Teahupoo site for the Olympic competitions. The second, signed with the State representative in Tahiti, Eric Requet, concerns the inevitable issue of security. Finally, the last one is dedicated to the passage of the Olympic torch relay in French Polynesia.

With the signing of these three agreements, Tahiti officially becomes one of the competition sites for the Paris 2024 Games. The overseas territory will go down in the history of the Olympic movement as the most decentralised since the creation of the Summer Games, as it is located in the Pacific more than 15,000 kilometres from the capital. The record promises to be hard to break.

The end of a false suspense, as the OCOG has never really considered a plan B since its choice of Tahiti for the surfing events, despite the concerns expressed by some local associations about the facilities planned to host the competitions.

Accompanied by Jean-Philippe Gatien, the sports director of Paris 2024, Tony Estanguet did not only come to discover the venues, initial the official documents and have a long session in the waves. He also wanted to reassure.

The three-time Olympic champion explained it in a press conference: “Since Friday, we have met all the players on the site. I have sensed satisfaction among them. The project is progressing well. It is positive for us and exciting for the population. Some developments are necessary, but most of them will be temporary so as not to alter the sites.”

Tony Estanguet assured the Tahitians that, despite the criticism, he never doubted the relevance of Tahiti’s choice. “I never doubted because we did it for the right reasons,” he explained. First of all, the Teahupoo wave is “the best there is” at this time of year. Extra-sporting reasons, too, by involving all the territories of France in the Olympic project.

It was a bad coincidence that the mythical Teahupoo wave refused to rise during the Paris 2024 delegation’s stay. Due to the lack of swell, the Tahitian leg of the World Surf League (WSL), the Outerknown Tahiti Pro (11 to 21 August), could not be launched. It had five consecutive days without competition.

Worrying? The OCOG is reassuring. In Tahiti, Tony Estanguet met the surfers. He explained to them that the competition period at the Paris 2024 Games, initially set at four days, will finally be extended to eight days.

As for the work sites, the OCOG president assured them that there was no question of imposing anything. Tony Estanguet wants to be “humble“. “The population is in the best position,” he suggested, to sort out a positive legacy from projects with no future.

There is no question, for example, of setting up floating stands. “We are starting with an organisation comparable to that of the Tahiti Pro,” he explained. “Expertise has been developed and we must rely on it”. The recruitment of Pascal Luciani, a regular collaborator of the WSL, for the OCOG office in Tahiti is proof of this desire.

Accommodation for officials and delegations? The Puunui Hotel, which is supposed to be renovated in time for the Games, remains a priority. “There is work to be done,” admits Tony Estanguet. But the project makes sense. In the event of an unavoidable delay in the work, the OCOG could turn to a plan B: a fleet of boats to house the athletes and other accredited guests.