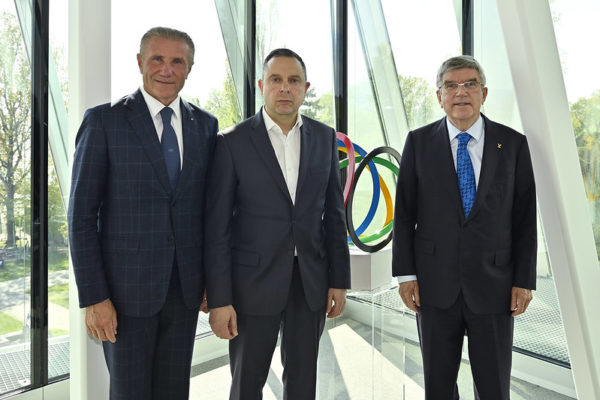 The document uses few words, only ten short paragraphs, but they say a lot. It is signed by Vadym Guttsait, the Ukrainian Minister of Youth and Sport and President of the National Fencing Federation (pictured above, centre, between Sergey Bubka and Thomas Bach).

Earlier this month, the former fencer and international referee, Olympic sabre team champion at the 1992 Barcelona Games, sent a letter to the International Fencing Federation (FIE), its acting president, Emmanuel Katsiadakis of Greece, and all the national federations that are members of the body.

The letter is on the letterhead of the Ukrainian Fencing Federation. FrancsJeux has seen it.

Almost six months after the beginning of the invasion of Ukraine by the Russian army, Vadym Guttsait speaks about the war. He speaks about it without forcing the line, by relating the facts, their horror and their victims.

“Russia continues its bloody war against Ukraine and the Ukrainian people,” writes Vadym Guttsait. “Every day Russia bombs the cities of Ukraine, not the military targets, but the homes of civilians. A considerable number of Ukrainian men, women and children die every day because of Russian attacks.”

The Ukrainian minister explains in his letter that the war has already claimed the lives of several members of the fencing community. He mentions the names of Mykola Khomrovyi, the father of sabre fencer Olena Khomrova, Olympic team champion at the 2008 Beijing Games, and disabled athlete Volodymyr Motylchuk. Both men were killed in the same town, Mykolayev, in the south of the country.

“More than 3,000 athletes went to war to defend their country,” says Vadym Guttsait. More than 100 of them have already died. It is impossible to continue sports training under aerial attacks and artillery fire. In addition, 111 sports facilities have been destroyed by the Russians so far, including one of the largest fencing centres, the “Unifekht” Club in Kharkiv. Thousands of young athletes are forced to leave their homes to escape the war.

In his letter, the Ukrainian leader then expresses his thanks to the FIE and the national federations for their support, in particular by helping the national team and dozens of young fencers to take part in official competitions, but also by offering them a roof and shelter.

Vadym Guttsait ended his letter, signed with his name and title as President, “The Ukrainian Fencing Federation believes that Russian and Belarusian athletes should be allowed to participate in international tournaments only after the end of this bloody war.”

Its decision was challenged in court by the Russian Fencing Federation. Its president, Ilgar Mammadov, asked for the participation of Russian fencers under the cover of neutrality. But his request was rejected by the FIE.