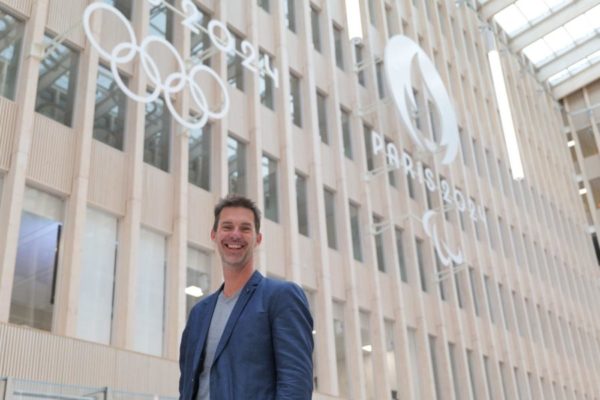 The series continues. After Pascale Bouton for rowing, FrancsJeux continues its bi-monthly gallery of interviews with the sports managers of the Paris 2024 Games. Frenchman Gilles de La Bourdonnaye, 49 years old, in charge of table tennis, took his turn in the question and answer session.

Gilles de La Bourdonnaye: I have a degree in international relations, with a specialisation in Franco-Chinese management. I worked for the Ministry of Foreign Affairs and the Pays de Loire region, in China, Brazil and Nantes. Before joining the OCOG Paris 2024, I was project manager for international development at the Pays de Loire Regional Council in Nantes.

What was your past experience of the Olympic Games?

I participated as a table tennis player in six editions of the Paralympic Games. The first five were consecutive: Barcelona 1992, Atlanta 1996, Sydney 2000, Athletes 2004, Beijing 2008. Then I stopped my sporting career, but I decided to come back to table tennis for the Tokyo 2020 Games. I won the final qualifying tournament, which guaranteed my sixth participation. I won nine Paralympic medals, three in each colour.

The opening ceremony. Or rather the opening ceremonies, because I have been to five of them. Each time, I feel the same emotions. They are incredible. You wait for three, four, even five hours outside the stadium, then you enter the corridor leading to the track for the parade of delegations. And then the emotion overwhelms me. It is indescribable. You can hear the crowd, almost 100,000 people at the Sydney Games in 2020. You get the impression that they are all there just for you. After that, of course, another very strong memory is my three gold medals.

The very precise list of volunteer needs for table tennis. The first step is to identify volunteers for the key positions. To do this, I am relying on the French Table Tennis Federation (FFTT), which has sent our needs down to the regional and local levels, in order to make an initial selection of volunteers who have already had some experience. In September, I will have a contingent of about a hundred people to be assigned to the most important positions. Square metre by square metre, I have to decide where to put them, define their responsibilities, calculate their number… They will have a key role to play in the success of the Games. They will be their trademark. In a second phase, in February 2023, we will launch a call for volunteers for the general public.

The table tennis competition venue at the Parc des Expositions at Porte de Versailles: its assets and challenges in the context of the Games?

I am lucky enough to have a unique venue for the Olympic and Paralympic Games, Hall 4 of the Parc des Expositions, with Hall 5 for training. This unity of location is an asset. The site has experience of major events. It is very safe. And it will be equipped with 360° screens. Another advantage is that it is a hall that we can configure according to the criteria of the IOC, IPC and ITTF. The venue is also very well connected. Athletes and officials will be able to get there in two minutes on foot. We will be sharing the Exhibition Centre with volleyball, weightlifting and possibly handball. We will be working with the other sports managers on the activities to be offered to the public. The challenge? We will inherit an empty hall. We won’t be able to forget anything when it comes to fitting it out. Moreover, it is located at the other end of Paris from the athletes’ village. But the challenge of transport will be especially important for the Paralympic Games in September.

Paris 2024 will be a success for table tennis if…

If the hall is full all the time, at the Olympic Games and then at the Paralympic Games. I’m not too worried about that. Paris 2024 will also be a success if we have a great atmosphere, suspense in the competition, matches fought to the 7th set. And then, why not, French medals. The two Lebrun brothers (Alexis and Félix, 18 and 15) are still young, but they have incredible potential. For the Paralympic Games, French table tennis players still have the means to bring back medals, like at the Tokyo Games (7 medals).