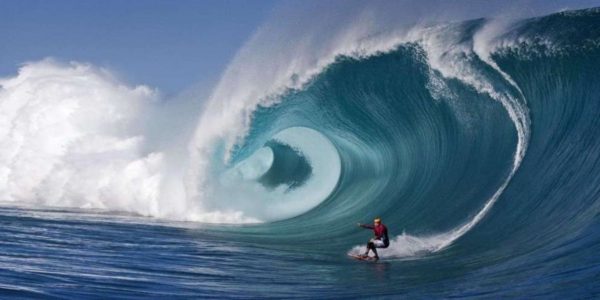 The date is very close. It is eagerly awaited. Polynesia and the Paris 2024 OCOG will get out their best pens at the end of next week to sign the agreement officially recording the organisation of the Olympic surfing events in Tahiti, on the Teahupoo wave.

The document will be initialled on the sidelines of OCOG President Tony Estanguet’s visit to Tahiti. The three-time Olympic champion is due to visit Polynesia from 11 to 16 August. This will be his first visit to the island since Tahiti was chosen as the venue for surfing, one of the four additional sports at the Paris 2024 Games.

It is also no coincidence that Tony Estanguet’s trip overseas will coincide with the organisation of the Outerknown Tahiti Pro, the penultimate stage of the world surfing circuit. It will be held from 11 to 21 August, and will feature the first competition since 2006 on the women’s world circuit.

Tony Estanguet’s visit to Tahiti had been planned for several months. It will follow an initial inspection of the future competition site conducted last November by Etienne Thobois, the OCOG’s director general. But to the surprise of many, the visit of the president of the organising committee almost never took place.

Naea Bennett, the Polynesian Minister of Sport, told AFP this week that Polynesia was not yet sure whether it was ready to embark on the Olympic adventure.

“We met with the president (of French Polynesia) Edouard Fritch to ask ourselves if we were really going, because the conventions have not yet been signed,” explained Naea Bennett, a former footballer. “But it’s decided, we’re going to do the Games. We wondered about the opportunity of major investments during the crisis we are going through, but in the end, we would have done them anyway.”

With less than two years to go before the Games, the development work has not yet begun in Tahiti. The machines are supposed to be put in order of battle after Tony Estanguet’s visit.

On paper, the worksites look modest. The Teahupoo marina is to be refurbished. A hotel, the Puunui, on the heights of Taravao, will be renovated. Located 13 km from the competition site, it will provide accommodation for athletes and officials during the Games. In case of delays (the duration of the work is not yet known), the Polynesian authorities have planned an alternative: a cruise ship.

So it is possible. But Tony Estanguet will find out for himself next week: the Tahitians have scaled back some of the facilities initially planned to host the surfing competition. They have abandoned the projects rejected by the local residents’ associations.

At the top of the list was the construction of a bridge over the river to access the public beach at Teahupoo. “The local residents did not agree to build a bridge, so we are not going to do it,” Naea Bennett admitted to AFP. You can cross the river with a 4×4, so we’re going to keep it that way. The access bridge will remain pedestrian. Not ideal.”

Another change to the initial project is that the single two-lane road (one in each direction) leading to the surf spot will not be widened. But the local authorities are reassuring that it will be reserved exclusively for accredited vehicles during the Games.

Naea Bennett makes no secret of the fact that the Olympic project is still slow to gain unanimous support in Tahiti. With two years to go, it remains too vague to seduce the locals. As proof of this, Cindy Otcenasek, president of the Vai Ara o Teahupoo association, said: “We haven’t had anything concrete for two years, so it’s difficult to make a decision. Now they have to present the project.”

Tony Estanguet’s visit, and the signing of the agreements, will provide a perfect opportunity.