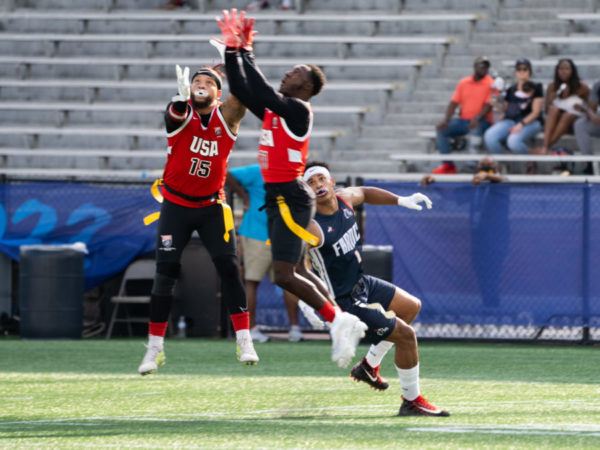 A team sport is knocking on the door of the Olympic Games. Flag soccer, a derivative of American soccer, has just been added very officially to the still imprecise list of candidates for entry into the program of the Summer Games in Los Angeles in 2028, as an additional sport.

A potential winner? Possibly. Played by teams of 5 players, the discipline does not lack assets, especially in the perspective of an Olympic appointment in California. Above all, its file is supported by the NFL, one of the most powerful and wealthy leagues in American professional sports.

The flag soccer bid is supported by the NFL and the International Federation of American Football (IFAF). The two organizations unveiled this week in Birmingham, Alabama, on the sidelines of the 2022 World Games, where flag soccer is making its debut in a multi-sport event, their joint project, called “Vision28”.

The Frenchman Pierre Trochet, president of the IFAF, explained to FrancsJeux the strategy and the ambitions.

FrancsJeux: You took the opportunity of the World Games in Birmingham, Alabama, where flag soccer enters the program, to present the “Vision28” project. What is it about?

Pierre Trochet: Vision28 is the name of the group that will lead the campaign for flag soccer to enter the Olympic Games program. It is the result of a close collaboration between the IFAF and the NFL. The group is co-chaired by Troy Vincent, the NFL’s executive vice president of soccer operations, and myself. As the name implies, our ambition is to be part of the Olympic Games in Los Angeles in 2028.

What is Vision28’s strategy for getting into the Olympic program?

The first step is in Lausanne. We are aiming for full recognition of the IFAF by the IOC. Today, our international federation has only provisional recognition. We hope to achieve this first objective before the end of the year. It is a prerequisite for entry into the Olympic program. But it is also part of a new dynamic for our international body, which has been underway for the past six months, with a development of the practice, a new governance, a reinforced calendar…

Are you already in discussions with Los Angeles 2028?

We are doing so through an intermediary, namely the IOC in Lausanne. But at the same time, we have launched a press campaign, particularly in the United States. And we are working hand in hand with the NFL, which should help us reach LA 2028. Our strategy starts in Europe, with the IFAF’s headquarters in Paris, but with an American version carried by the NFL.

What role does the NFL play in your Olympic campaign?

The NFL has been our premium partner since the beginning. But its presence by our side is not limited to this Olympic project alone. It’s part of a broader development effort. The NFL has a global audience, with millions of fans around the world. Our partnership can help us reach those millions of fans and turn them into flag soccer players. The NFL also participates in the life of the IFAF, in the realization of sports and development projects. It also provides us with human and technical resources and skills, especially for the training of coaches.

According to the IOC criteria, an additional sport must be able to attract a young public, meet the requirement of gender diversity, not inflate the costs and require a reduced quota of athletes. Does flag soccer tick all these boxes?

Not only does it check all of them, but you have just given the definition of flag soccer. It is played by men and women, and even by mixed teams in some competitions, like the French championship for example. To play it, all you need is a ball at 100 or 200 euros, a flag belt at 10 euros, and a pair of sneakers. The teams have only 5 players. Two or three flag fields can fit in a stadium, like in Birmingham for the 2022 World Games. As for its audience, it is very similar to that of 3×3 basketball. Generation Z is very clip-oriented, atmospheric and fast.

In its NFL version, American soccer cannot reach the whole world. Its audience is global, but its practice cannot be, notably because of the cost of the equipment and the fields. Flag soccer, on the other hand, is suitable for all ages, all sizes, and can be played in a variety of environments: indoor halls, stadiums, outdoor fields… There is no obstacle to its practice and development. Today, IFAF has 72 member countries, but flag is played in more than 100 countries.

What is your schedule to hope to enter the Los Angeles 2028 Games?

We are currently at the World Games in Birmingham for the first time, with two tournaments, one for men and one for women. We will then go to Finland for the Women’s World Cup, an eight-team competition. Next year will mark a new stage in our development with, for the first time, a continental flag soccer competition on each continent. At the same time, I chaired my first IFAF Congress since my election as President last December in Birmingham on Thursday 14 July. We hope to have in 2023 a response from Los Angeles 2028 to our ambition to enter the Olympic program.