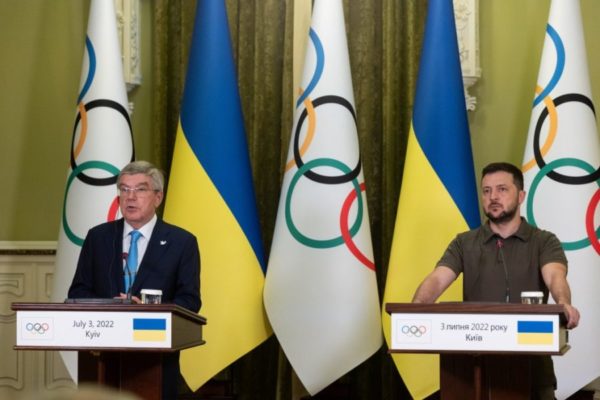 The visit had not been announced. But it was not kept secret. Thomas Bach went to Ukraine on Sunday, July 3, more than four months after the beginning of the invasion of the country by the Russian army. The IOC President met very officially in Kiev with the Ukrainian Head of State, Volodymyr Zelensky.

What can we learn from this visit, the first one made by Thomas Bach since the beginning of the conflict? A confirmation, to begin with: the Olympic authority is on the Ukrainian side. And it intends to do so in the long term.

As proof, Thomas Bach announced at the end of his exchange with Volodymyr Zelensky: the IOC will triple its financial aid to Ukrainian athletes. The special fund opened at the end of February was launched with an endowment of 2.5 million dollars. It will be increased to 7.5 million in view of the Games of Paris 2024 and Milan-Cortina 2026. Objective: to help Ukrainian athletes to “raise high” their flag during the next two Olympic events.

Thomas Bach also specified that the coordination of the assistance to the athletes, brought by the IOC and by the other authorities of the Olympic movement, would continue to be assured by Sergueï Bubka, the president of the Ukrainian Olympic committee. The former pole vaulter will have in particular to organize, before the end of the year, a conference of the donors of the Olympic movement. It will be open to the IOC’s economic partners and will focus, among other things, on aid for the reconstruction of sports infrastructure in Ukraine.

Another confirmation: the position of the IOC towards Russia will not change. Of course, there is still no question of banning Russian members from the Olympic body. But Thomas Bach assured Volodymyr Zelensky on Sunday July 3 that “the time had not come” to relax the sanctions recommended last February. At the head of the list, the exclusion of Russian and Belarusian athletes and officials from all international competitions.

Obviously, Volodymyr Zelensky appreciated. The speech, but also the actions. “More than a hundred thousand Ukrainian athletes do not have the opportunity of training,” he explained, quoted on the official website of the Ukrainian presidency. Hundreds of sports facilities were destroyed. Many Ukrainian athletes joined the Armed Forces to defend our country on the front. To date, eighty-nine athletes and coaches died as a result of hostilities, Thirteen were captured and are in Russian captivity”.

Thomas Bach and Volodymyr Zelenskyy are not at their first meeting. The two men had already met last September in Kiev, on the occasion of the 30th anniversary of the Ukrainian National Olympic Committee. Volodymyr Zelenskyy had taken the opportunity to talk about a candidacy of his country for the Winter Games in 2030.

The Russian invasion made fly the project in splinters. But, surprise, the question was discussed again on Sunday, July 3 between the two leaders. Still according to the official version, Thomas Bach and Volodymyr Zelenskyy “discussed the strategy of development of Ukrainian sport after the war”.

“I have no doubt that after our victory we will be able to provide all necessary conditions for holding international sports events at the highest level in Ukraine” insisted the Ukrainian president. Our athletes, our country, have already made a significant contribution to the development of the Olympic Movement. . But our possibilities are much greater, and we will certainly implement them.”

As a priority, the Winter Olympics, in “a peaceful, free and reconstructed Ukraine.” Realistic? By 2034, everything is possible, assures the IOC. Thomas Bach was careful not to close the door. He said he was “impressed” by the intentions of Ukraine to host the Winter Games. The German leader would have even explained to Volodymyr Zelenskyy that his country can lead as soon as it will wish it of the discussions with the commission of the future host cities.