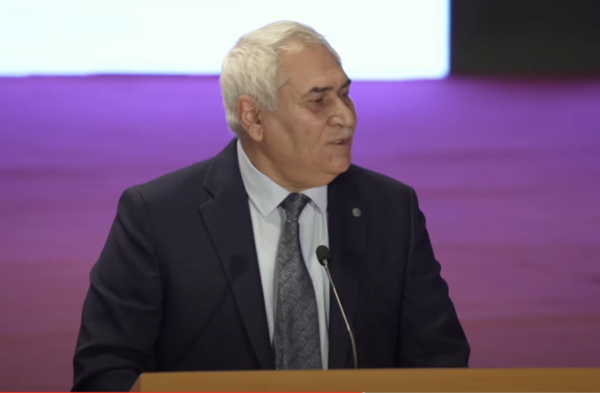 It was about time. After a succession of postponements and incidents worthy of a bad TV movie scenario, the International Weightlifting Federation (IWF) has finally got a president. A real one, elected and not appointed by default, without the mention “interim” attached to his name.

The Iraqi Mohammed Jalood (photo above) will preside the IWF after having been elected not without difficulty during the congress of the body in Tirana, Albania. Originally from Iraq but also a citizen of Kazakhstan, his wife’s country, this former high level weightlifter became the first Asian president of the international body.

The new strongman of weightlifting was among a list of 11 candidates for the presidential post. He beat Qatari Yousef Al-Mana in a confused election, which was interrupted for an emergency meeting of the electoral commission after an imbroglio in the announcement of the results.

In the aftermath, the vote produced a new executive committee. The good news is that 12 of its members were not members of the old regime, a two-thirds renewal rate. Another positive development was the election of the first woman vice-president, the Greek-American Ursula Garza Papandrea. She will be accompanied by four other vice-presidents: the Greek Pyrros Dimas, the Czech Petr Krol, the Venezuelan Doris Travieso, and the Hungarian Attila Adamfi, former director general of the IWF.

Just elected, Mohammed Jalood set the scene. “There is a renewed energy within our organization, he suggested in his post-election speech. I have already had the chance to discuss with my team who are ready to get to work and start delivering good things for our sport. We have a lot of new members and a lot of good experience within the newly elected Executive Board. The IOC and the world are watching.”

The whole world, perhaps not. But the IOC certainly is. And what he saw, read and heard coming out of the Tirana Congress should not reassure him much about the state of fitness of the world weightlifting body.

The election of the secretary general of the IWF, the Peruvian José Quinones, sums up in itself the slippages and errors of an international federation that has been mired for decades in corruption and doping. It also explains the decision of the IOC Executive Board to temporarily withdraw the discipline from the programme of the Los Angeles 2028 Games.

First of all, the man himself. A long-time official of world weightlifting, José Quinones had been banned for five years by a Peruvian administrative tribunal. He was accused of financial mismanagement. José Quinones appealed. His suspension has now expired. But his accreditation for the Tokyo Games was withdrawn by the IOC, before he got it back.

Then there was the ballot. According to the InsidetheGames website, his election as Secretary General was a mistake. A miscount of the votes. José Quinones received 68 votes, against 60 for the Italian Antonio Urso and 16 for the Iranian Ali Moradi.

The only problem was that José Quinones needed at least 73 votes to win, i.e. an absolute majority. With his score, a second round should have been organised between the Peruvian and the Italian. The IWF did not agree to this. A “human error”, the body pleaded.

The second round in question will finally take place on Thursday 30 June, in person and online for delegates who have already left the capital of Albania.

In Lausanne, the electoral circus and the identity of the initial winner of the vote for the post of Secretary General will add to the IWF’s thick file. The Olympic future of weightlifting was already very much in doubt. Now it seems to be hanging by a thread.