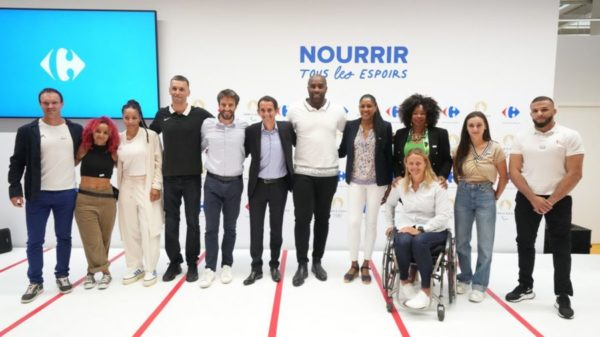 Its map of the sites is still struggling to take shape, but the Paris 2024 OCOG is showing a copy full of promise in another high-cost area: marketing. A handful of weeks before the symbolic date of D – 2 years before the opening, its list of partners has been enriched by two new lines.

On Monday 20 June, Tony Estanguet took to the skies to sign a contract with the engineering group Egis on the terrace of a hotel in the 16th arrondissement. Already present during the bidding phase, he joined the adventure as an official supporter, the third rank in the marketing programme.

Two days later, the OCOG President took his smile and his pen of the moment to a place more in line with the ambition of the Olympic and Paralympic project: Seine-Saint-Denis, in the town of Drancy. He initialled a contract with the Carrefour group for a presumed double-digit sum.

The retailer with 5,000 shops has become a premium partner of the Paris 2024 Olympic and Paralympic Games. It joins the top of the pyramid, the very elitist category of first-tier sponsors. It already had four names – Orange, EDF, BPCE and Sanofi – but had not been added since July 2021. Carrefour becomes the fifth.

The amount of the partnership has not been communicated, but it will not reach the 100 million euro mark, which has long been considered the entry ticket to the premium category. There are two reasons for this. With less than 800 days to go before the Games, the activation period is now shorter. Above all, the contract concluded between Paris 2024 and Carrefour includes a service component, with the food retail group having to provide fresh and organic products (fruit, vegetables, cereal products, meat, fish and seafood) in the various athletes’ villages.

“With its popular roots, its 5,000 shops in France and its blue-white-red logo, the Group wants to contribute to the success of this great sporting event, help all French people to take part and associate our brand with the great values of Paris 2024,” insisted Alexandre Bompard, the CEO of Carrefour and former sports director of Canal +.

Carrefour will also develop exclusive collections bearing the Paris 2024 logo across a wide range of product families (textiles, stationery, back-to-school, etc.). The group is also offering itself a team of athletes, an activation that has become very trendy in the Olympic movement. In the role of captain, the judoka Teddy Riner, who said he was “very proud” to be associated with Carrefour, where as a child he loved to accompany his parents on family shopping trips.

Marketing, which has long been criticised as a weak link, is finally proving to be one of the successes of the Paris 2024 OCOG. The successive departure of two directors of the department, Frédéric Longuépée from October 2018, then Marlène Masure last February, does not seem to have slowed the pace too much. Neither did the health crisis.

The OCOG confided it at the beginning of the week during a press briefing with a few media: the category of premium partners is not destined to welcome only five names. A sixth, at least, is hoped for. It could be announced in the next few months. Its identity has not been confirmed by the organisers, but it would be the LVMH group, the global behemoth of the luxury industry.

With two partners announced in three days – Egis and Carrefour – Paris 2024 can roll over. “We should reach our objective of 80% of marketing revenue by the end of the year,” the organising committee promises.

The bar had been set at a minimum of 1.1 billion euros, or about a third of the OCOG’s budget. The global pandemic made us fear the worst, but the lights are back on. With two years and a few weeks to go before the Games, Tony Estanguet and his team would not mind exceeding the forecasts. The OCOG could then smoothly absorb the likely inflationary surcharges.