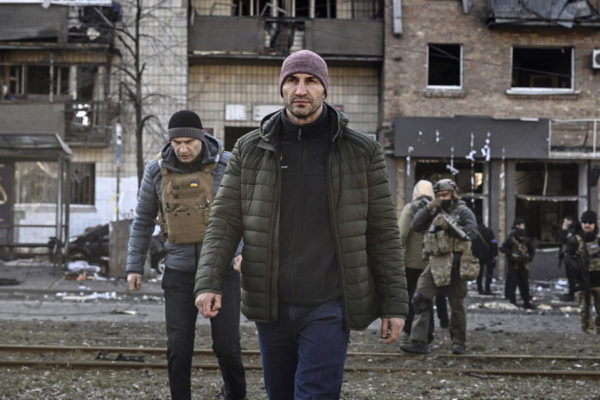 Coincidence or not? Former Ukrainian boxer Wladimir Klitschko (pictured above, centre), one of his country’s leading sports figures, called on the IOC on Tuesday 17 May to ban Russian athletes and teams from all future major competitions. The priority is the Olympic Games.

The former world heavyweight champion made the call on television in a talk show broadcast in Britain, Australia and the United States on the eve of a two-day meeting of the Olympic body’s executive board. Three days before an IOC session where, in a troubling ambiguity, Russian members will be welcome.

Wladimir Klitschko is not the first athlete to come. World heavyweight champion between 2000 and 2003, and again between 2006 and 2015, he has been one of the most vocal voices since the Russian invasion began. He joined the Ukrainian reserve army in the early days of the conflict. His older brother Vitali, who entered politics after his boxing career (he was also a world heavyweight champion), has been the mayor of Kiev since 2014.

“The IOC should ban the Russian team from the Games now, Wladimir Klitschko told Piers Morgan Uncensored. With the war in Ukraine, the Russians should not be allowed to participate in the next Olympics, or any sporting event. This war is being fought by their country.They are representing their country. Actions speak louder than words. Isolation, and this isolation speaks louder than any word or any line because isolation is painful. It will be painful for the athletes, for the economy, and for everyone involved with Russia.”

Since the Russian army invaded Ukraine at the end of February, the IOC has not been idle. Its executive board has very officially “recommended” that international federations ban Russian and Belarusian athletes from their competitions. The recommendation extends to officials from both countries and to events held in Russia and Belarus. It has been followed by the vast majority of the Olympic movement.

The IOC also launched a fund to support the Ukrainian Olympic community. Led by Sergey Bubka, it has already raised over $2 million.

But at the same time, the IOC still refuses to suspend the Russian National Olympic Committee (ROC). Nor has it banned, even temporarily, its Russian members. Two of them, Yelena Isinbayeva and Shamil Tarpishchev, are active members. Two others, Vitaly Smirnov and former swimmer Alex Popov, belong to the more honorary college of honorary members.

“Under the Olympic Charter, the IOC members are not representatives of their country within the IOC, said the IOC spokesperson. They are on the contrary elected as individuals by the IOC and then delegated as ambassadors of the IOC to the sports organisations in their country.”

Yelena Isinbayeva and Shamil Tarpishchev will therefore be authorised to take part on Friday 20 May, either in person or remotely, in the third and final day of the 139th IOC Session, which began and continued last February in Beijing on the sidelines of the 2022 Winter Games.

Earlier in the week, the IOC Executive Board will have gathered its members for two days of meetings on Wednesday and Thursday 19 May. On the agenda, in particular, the response to the conflict in Ukraine and the situation of the International Boxing Federation (IBA), more than ever in the eye of the storm after the re-election of Russian Umar Kremlev as President.

Will Thomas Bach and the other members of the Executive Board answer Wladimir Klitschko’s call? Will they propose to the session to ban Russia and Belarus from the Paris 2024 Games now? Answer in the coming hours.