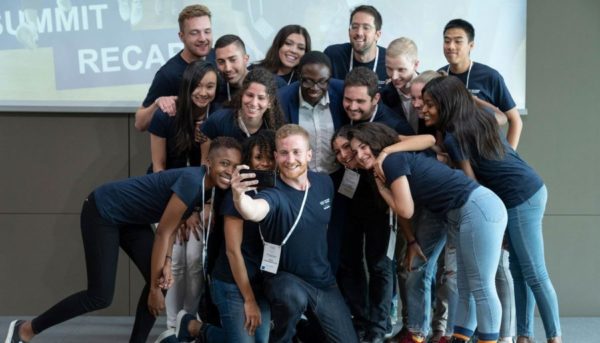 The health crisis has postponed the next Summer Youth Games by four years to 2026 in Dakar, depriving a whole generation of athletes of their first Olympic experience. But the IOC is not forgetting the young.

Since 2016, the Lausanne-based body has dedicated a programme to them, supported by one of its global partners, Panasonic. Initially named Young Ambassadors and directly associated with the Youth Games, it was later renamed Young Change-Makers. Then it was renamed Young Leaders.

The head of the programme at the IOC, Croatian Ana-Marija Garcevic, was in Paris this week with three Young Leaders for Global Sports Week. She answered FrancsJeux’ questions.

FrancsJeux: Six years after its creation, where is the IOC Young Leaders Programme today?

Ana-Marija Garcevic: The programme was initially very much associated with the Youth Games. Originally, the Young Ambassadors’ mission was to promote the event, but also how sport could play a concrete role through projects with a social dimension. In 2020, we re-evaluated the programme. It now operates in four-year cycles. The financial support has also been increased to 10,000 Swiss francs (EUR 9,600) per project. We are investing more and for longer. The programme is also more individualised in terms of the requirements for the Young Leaders, as some are still students while others are working full-time. The current class has 25 young people aged between 19 and 30. We will select another 25 at the end of the year. We have two selection phases per four-year cycle.

How are these Young Leaders recruited?

The selection is done in two phases. The first phase is open to all. It lasts six weeks and allows us to make an initial selection from among the many applications from all over the world. We receive about 3,000 applications. During this initial phase, a session is organised every week, dedicated to Olympism and Olympic values. The candidates who have completed the six weeks of this first stage, 550 in the current intake, continue the selection process. They have to write a letter of motivation and make a one-minute video introducing themselves and explaining their project. We then draw up a shorter list of around 100 applicants. The 25 Young Leaders are finally chosen by a panel of 16 people from the various IOC departments.

Does the class manage to reflect the Olympic movement’s rules of universality and gender diversity?

Yes, the latest batch of 25 Young Leaders includes 13 girls and 12 boys. With the exception of Oceania, where the number of candidates is small, all continents are equally represented. We have a young Spanish woman from the LGBT community. The projects carried by these young leaders also reflect a great diversity. They focus on health, well-being, peace, climate change, inclusion…

The IOC is not the only organisation to fund social and humanitarian programmes, but it is one of the only ones to have them run by young people. Is this particularity felt in the nature of the projects proposed?

We are not the only ones. FIBA, for example, is developing a programme with young people via its foundation. Sometimes we work together. I think that what characterises the projects in our programme, and especially those who carry them, is a mixture of energy, a certain naivety and a very idealistic approach. The IOC Young Leaders believe they can make a difference. We encourage them to do so. The best example is probably the young Korean woman, a member of the last graduating class, whose dream was to launch a women’s ice hockey league in her country, in view of the 2024 Winter Youth Games in Gangwon. There is no such league in South Korea. On paper, the project seemed impossible, or at least very complicated. But she talked to the partners, the federation… She is succeeding. Today, everyone wants to join her project and accompany her.

Are the Young Leaders becoming players in the Olympic movement, as the name of the programme suggests?

The programme is still young, only six years old. We will probably have to wait until it reaches ten years to draw up a first assessment. But 18 young people who have participated since its creation are currently sitting on the various IOC commissions. There are many examples of former programme members joining National Olympic Committees, international federations or private partners. The programme has opened doors for them, not only in the sports movement, but also in the sports business and the environment.