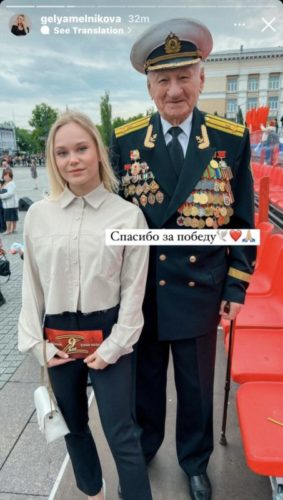 Embarrassing. Neutrality has been the norm among Russian athletes since the start of the conflict in Ukraine, but more and more of them are openly showing their support for Vladimir Putin. At the head of the procession, the gymnasts.

The TASS agency reports that Nikita Nagornyy, a four-time Olympic medallist who won the team all-around title at the Tokyo Games last summer, took a very active part in the Victory Day parade in Moscow on Monday 9 May. Organised every year on the same date, the parade commemorates the victory of the Soviet Red Army over Nazi Germany on 9 May 1945.

The Russian gymnast marched in the units of the national corps of young army cadets. According to TASS, he then confided that he wanted to call his grandparents. “When I told them that I would take part in the Victory Day parade at the head of the Yunarmiya group, they burst into tears,” explained Nikita Nagornyy.

On Monday 9 May, Nikita Nagornyy was not the only Russian athlete present in Moscow to show his patriotism and support for the Kremlin regime. Angelina Melnikova, also a multiple Olympic medallist at Rio 2016 and Tokyo 2020 in gymnastics, also marched on Red Square.

The young woman was not afraid to show off. The website Gymnovosti posted a photo on its Twitter account of her posing with a Russian army veteran, holding a cardboard box marked with the letter Z, the militaristic symbol associated with supporters of the invasion of Ukraine (photo above).

According to Russian media reports, two other Olympic medallists, wrestlers Roman Vlasov and Musa Evloev, also took part in the parade on Monday 9 May in Moscow.

They are not the first. Svetlana Khorkina, one of the legends of Russian gymnastics, seven times Olympic medallist between Atlanta 1996 and Athens 2004, had opened the way by sharing on her Instagram account several pictures of her displaying the letter Z. One of them was accompanied by the caption: “A campaign for those who are not ashamed to be Russian“.

Svetlana Khorkina, 43, has never hidden her support for the Kremlin regime. She entered politics at the end of her sports career and was Vladimir Putin’s sports advisor.

The ceremonies commemorating the annexation of Crimea by Russia on 18 March were also marked by the remarkable presence of several Russian sports figures at the Luzhniki Stadium. At the top of the list was the swimmer Evgeny Rylov, Olympic champion in the 100 and 200m backstroke last summer in Tokyo.

After being suspended by the International Swimming Federation (FINA) for breaking its rules by appearing at a political event, Evgeny Rylov defended himself by explaining that he only wanted to honour an invitation to a concert. He then defied FINA by lining up at the national swimming championships, despite being banned from competition.

Several other athletes, including gymnastics sisters Dina and Arina Averina, participated in the Luzhnik Stadium commemorations. Some of them even displayed their medals and the Z symbol.

Earlier this month, a young Russian gymnast, Ivan Kuliak, stood on the podium of an international competition in Doha wearing a shirt with the letter Z hastily sewn on. The International Gymnastics Federation (FIG) has announced an investigation. Ivan Kuliak could also be suspended.

For the international sports authorities, the resolutely militaristic stance of certain Russian athletes is a serious headache. Should they be sanctioned for displaying their patriotism? FINA decided to suspend Evgeny Rylov for nine months. But the sanction did not seem to affect the swimmer much. He explained to his country’s media: “I was already banned from all competitions anyway because of my nationality alone.”