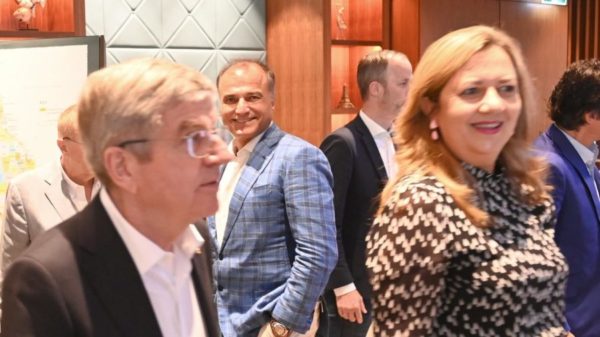 The Australians did not invent Olympism. The Greeks did so before them. But they seem determined to give it a new dimension. With Brisbane’s victory in the race for the 2032 Summer Games, they are reinventing the rules of anticipation and preparation.

An IOC delegation made its first visit to the potential competition venues for the Brisbane 2032 Games on Wednesday 4 May. A tour of the field, in real life and “face to face”. Ten years and a handful of months before the event. Never before seen. A kind of Olympic record, broken at a stage of the process where site visits usually concern the candidate cities.

Leading the way for the IOC was Kirsty Coventry. The former Zimbabwean swimmer was chosen last year to chair the Brisbane 2032 Games Coordination Commission. This was her first major assignment since being appointed as an individual member of the Olympic body, after nine years as a member of the Athletes’ Commission.

One row behind, Christophe Dubi, the IOC’s Executive Director of the Olympic Games. A regular in this exercise. Other guests this morning included representatives of the Australian, local and national political authorities.

Without the slightest surprise, this first IOC visit to Queensland since Brisbane was designated as the host city for the 2032 Summer Games did not reveal any hidden defects. Thomas Bach had set the tone from Sydney over the weekend by suggesting that the collaboration with the Australians was starting as a “honeymoon”. Kirsty Coventry confirmed this.

The former swimmer even suggested at the beginning of her visit to Australia that e-sports could be part of the Olympic programme at the Brisbane 2032 Games. An option “under consideration”, according to Kirsty Coventry.

With more than ten years to go, everything is on track. But the first controversy has come to the fore in the postcard setting of Queensland. It concerns the state’s premier, Annastacia Palaszczuk (pictured above, with Thomas Bach). The Australian leader has come under fire, not least from the political opposition, for bringing her companion, a doctor named Reza Adib (pictured centre), to a very formal meeting with Thomas Bach last weekend at a grand Sydney hotel.

The meeting was attended by most of the major players in the Olympic project, including the IOC president, Brisbane mayor Adrian Schrinner, the inevitable John Coates and his successor as head of the Australian Olympic Committee (AOC), Ian Chesterman.

On arrival at the Sydney Sofitel, Annastacia Palaszczuk was accompanied by Reza Adib. In itself, nothing very reprehensible. But the Australian media reported that the Prime Minister’s companion was present at the meeting. This presence was all the more criticized, including by the Federal Minister for Sport, as several stakeholders had not been invited, including representatives of the Aboriginal community and the Paralympic movement.

Faced with the controversy, Annastacia Palaszczuk was forced to apologise. She explained in a press conference on Tuesday 3 May that she had made a “mistake” in inviting her partner. “I recognise I have made a mistake, she suggested to the media. I should not have taken my partner to that meeting. I apologise. But it was an informal meeting.”

Pressed with questions about the nature of the meeting’s discussions, Annastacia Palaszczuk assured that everything she had discussed with Thomas Bach and the other guests had already been made public. ” I talked about things I have talked publicly, so I talked about the international broadcast centre … OCOG board (Organising Committee Board) had its first meeting and the Cross River rail project.”

Later in the day, his spokesperson reiterated to the Courier-Mail that all participants had been invited by the IOC President and the Prime Minister, but that “nothing confidential was discussed”.