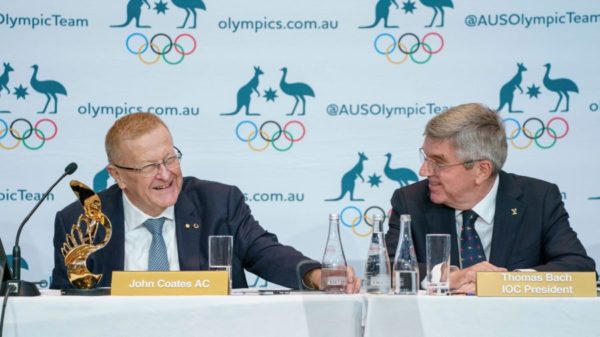 A page is being turned in Australian sport. John Coates handed over the keys to his office as President of the National Olympic Committee (AOC) on Saturday 30 April. An office he knew every corner of with his eyes closed. He occupied the space for 32 years. A record.

To replace him, the delegates of the Australian sports movement did not really hesitate. Two men were running to fill John Coates’ shoes: Ian Chesterman, already in the position of vice-president, seven times head of mission of the delegation to the Olympic Games; and Mark Stockwell, a former triple medal swimmer at the 1984 Los Angeles Games, also known as the husband of Tracy Caulkins, one of the legends of American swimming.

The battle was expected to be close. It was not. Ian Chesterman was elected president of the AOC with 67 votes, against only 26 votes for Mark Stockwell.

So a page is being turned. Ian Chesterman will lead the Australian Olympic movement into what promises to be a historic decade for the country, leading up to the Summer Games in Brisbane in 2032. His victory was welcomed by Thomas Bach, who came to Sydney as a guest of honour at the handover.

The IOC president paid a personal tribute, but directed it at the old rather than the new. “In the Olympic Movement, we know a lot about unique individuals, suggested Thomas Bach, referring to John Coates. You may not have the grace and elegance of Cathy Freeman, and you may not have the dynamism of Dawn Fraser, but you are truly a ‘one-off’. You have changed the face of the Olympic Movement here in Australia. You are a champion, my friend.”

Thomas Bach did not reserve his praise for John Coates alone. The German leader also shared his enthusiasm at the prospect of working with the Australians for the 2032 Games in Brisbane. With more than ten years to go, the work has not yet really begun, as the organising committee has only held one meeting. But Thomas Bach is adamant that the Australians are on the right track.

“We are not only satisfied, we are impressed and happy, insisted Thomas Bach. We are off to a really wonderful start. We are extremely impressed by the quality of the board of the organising committee, by the diversity and the focus which is put on the athletes and the inclusivity of having two indigenous people on the board. This honeymoon will not last forever, as we know from experience. Like every marriage it will have its ups and downs, but mutual respect and enthusiasm will make sure we overcome some unexpected obstacles.”

At nearly 72 years of age (he was born on 7 May 1950), John Coates can look forward to the honeymoon and wedding years that Thomas Bach spoke about to the Australian Olympic movement. The IOC said in a statement that he would remain honorary president of the National Olympic Committee and vice-president of the Brisbane 2032 Organising Committee.

The information is revealed by the Guardian: John Coates has prepared his own presence at the forefront of the preparation of the Brisbane 2032 Games. The British daily explains that he wrote his own letter of recommendation, in April 2021, to sit on the organising committee of the Olympic and Paralympic event.

His presence on the Brisbane 2032 board of directors was not a given once he gave up his position as president of the National Olympic Committee. John Coates knew this. According to the Guardian, the Australian took the lead in arranging for a seat to be reserved for him as honorary president of the AOC.

Sent to Matt Carroll, the chief executive of the COA, the letter prepared by John Coates said it would be “difficult to imagine anyone better qualified in the world of sport” to be appointed to the organising committee of the 2032 Olympic Games in Brisbane.

John Coates is said to have asked that the letter be signed by Matt Carroll and then passed to Peter Sheehan and Mark Cushing, two experts from BDO Consultancy, an accounting firm involved in setting up the Brisbane Games organising committee.

The letter continued: “Accordingly, you and the OCLG are requested to include a position for AOC honorary life president on the Ocog commencing on the conclusion of his membership as an independent IOC member.” The request was unopposed.