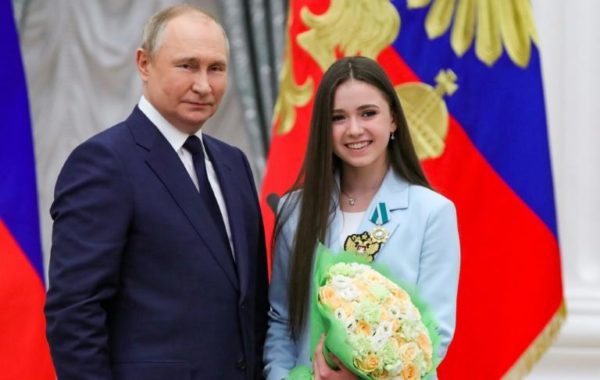 The Russian athletes have probably already made up their minds: the 2022 sports year will be played without them. But they can take comfort in the fact that their country is not letting them down. At the top of the state, in particular, support is unwavering.

Vladimir Putin set an example on Tuesday 26 April when he received the Russian medallists of the Beijing 2022 Winter Games in the Kremlin. The ceremony was very formal. Very formal, too. The awards were handed out and the champagne flowed. State television shared the images without leaving a single crumb.

All smiles, Vladimir Putin did not only give the medallists their awards. He expressed his support for the two most high-profile “victims” of recent months in the Russian camp, figure skater Kamila Valieva and swimmer Evgeny Rylov.

In the case of the former, who celebrated her 16th birthday on Tuesday 26 April, the Russian president took on the manner of an expert pirouette and quadruple axel to express his opinion as head of state.

“The whole country and all figure skating fans around the world trembled for Kamila, he suggested. Her talent combines all the most complex elements of figure skating, her plasticity, beauty, power and tenderness. Through her work, she has elevated the sport to the level of true art. This perfection cannot be achieved in a dishonest way, by using extra means, by resorting to manipulations. In figure skating, all these extra means are useless, we know and understand this perfectly.”

The message is clear: Kamila Valieva did not cheat. The case of her positive test at the end of December for trimetazidine, a banned substance, is therefore not a case. Vladimir Putin is adamant that such talent (Kamila Valieva is the first skater in the world to have achieved quadruple jumps at the Games) cannot be the result of a bad pick in the medicine cabinet.

In the lead after the short programme at the Beijing Winter Games, Kamila Valieva then completely missed her free skate. Paralysed by the pressure, she made a series of mistakes and falls, and finally inherited 4th place. The young Russian was nevertheless honoured on Tuesday 26 April in the Kremlin, even though she is not an official Olympic medallist (the medals for the team figure skating event, won by Russia, have still not been awarded by the IOC). She received a state trophy from Vladimir Putin.

Another case that was brushed aside by the Russian president was Evgeny Rylov. Olympic champion in the 100 and 200m backstroke last summer in Tokyo, the swimmer was suspended for nine months by FINA for having taken part in a pro-Putin demonstration at the Luzhniki stadium in Moscow last March, celebrating the 8th anniversary of the annexation of Crimea.

For Vladimir Putin, such a sanction is simply “absurd“. He took the opportunity to repeat once again that Russian and Belarusian athletes were victims of discrimination because of their nationality.

Finally, the Russian president ended his participation in the ceremony organised in the Kremlin by promising that his country would not disappear so easily from the international sports scene. His idea: to multiply the number of substitute competitions for cancelled or banned events.

“The cancelled competitions must be compensated for by our own new formats, insisted Vladimir Putin. And we can do it quickly. For this, we should invite international athletes, clubs, teams.”

A first attempt was made with a friendly women’s handball tournament, where China sent a team. It should not be the last.