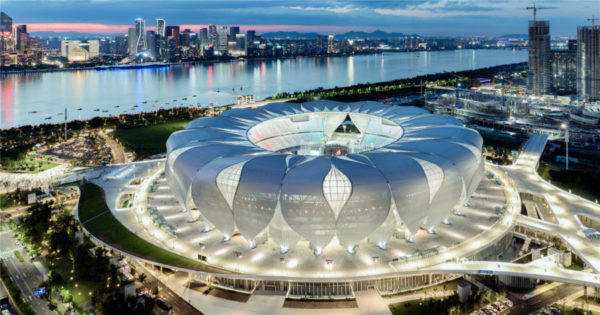 The soap opera continues. The scenario remains the same. A new major event on the international sports calendar is threatened with postponement because of the health crisis. Not the least: the 2022 Asian Games. They are scheduled to take place from 10 to 25 September in the Chinese city of Hangzhou, capital of Zhejiang province.

Officially, the option of a postponement is not yet being considered by the Chinese side. The organisers are even multiplying their announcements and initiatives to reassure the sports movement that the multi-sport event will be held.

At the beginning of the month, they stated that all the competition sites were now delivered and ready for use. Three of them have already hosted national championships. For the remaining 50-plus venues, a series of test events is planned in the coming weeks.

“We are in the process of making some final adjustments and improvements to the facilities,” explained Lu Chunjiang, an official in charge of operations at the Hangzhou Olympic Sports Centre, quoted by state television CCTV.

At the same time, the employees of the organising committee were invited to take an oath to express their commitment to organising a successful Asian Games. The ceremony took place at the Hangzhou Olympic Centre. It was attended by nearly 8,000 people.

However, the risk of a postponement is real. The director general of the Association of Asian Olympic Committees (OCA), Kuwaiti Husain Al-Musallam, told AFP on Thursday 21 April: “No official decision has been taken by the committee until now, but there is a possibility that it will be postponed.”

The reason is known: the outbreak of COVID-19 cases in a part of China. In Shanghai, in particular, located just two hours northwest of Hangzhou, the authorities imposed a total lockdown on the population earlier this month. The rules have been relaxed slightly in recent days, allowing 12 million of the Chinese city’s 25 million inhabitants to leave their homes, but not to leave the perimeter of their residence or neighbourhood.

In recent weeks, China has unhesitatingly scratched a new series of sporting events planned in the country in the coming months, including the World Weightlifting Championships in November 2022. The latest is the East Asian Football Cup. It was scheduled to take place in several Chinese cities next July. It will finally take place in Japan.

Will the Asian Games be next on the list? The OCA is considering it and is not hiding the fact. The Chinese, for their part, are keeping their strategy to themselves. They had to announce their health plan to maintain the event in the context of the health crisis. It has not yet been unveiled.

The postponement of the 2022 Asian Games in Hangzhou could lead to the postponement of the World University Games, scheduled for 26 June to 7 July in Chengdu, Sichuan. The director of the organising committee, Jing Zhao, assured last month that the health crisis did not threaten the event. She explained that the World University Games were “guaranteed”, but that health measures would be comparable to those put in place for the Beijing 2022 Winter Games, with a hermetically sealed bubble and a daily PCR test for all accredited persons. But with two months to go before the event, there is still some doubt.