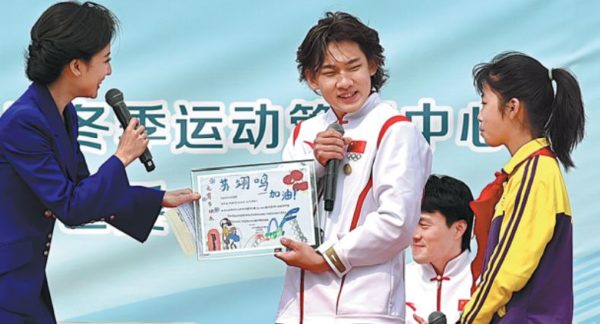 Have the Chinese already succeeded in their gamble? Perhaps. Only one month after the end of the Beijing 2022 Winter Games (4 to 20 February for the Olympic event, 4 to 13 March for the Paralympic version), the Chinese regime’s ambition to transform the country into a winter sports giant already seems to be a reality.

The health crisis and the near absence of spectators at the competition sites have not changed anything: the impact of the 2022 Winter Games on public interest and the practice of snow and ice sports in China is already measurable. It is impressive.

The first clue: the figures. According to data from the Chinese tax authorities, the winter sports industry experienced a growth spurt in the first quarter of 2022 that is unmatched in history. In March alone, the first post-Olympic month, sales of skiing and skating products rose by 65% in the Chongli district, where the Zhangjiakou cluster, the site of the Nordic skiing, snowboarding and freestyle skiing events, is located.

For the first quarter of 2022, the turnover of the winter sports industry grew by 35.2% in the same Chongli district. In Yanqing, the site of alpine skiing competitions, the increase reached 68.9%.

The same growth spurt occurred in the accommodation and catering sectors. In Chongli, the results show a 350% increase in turnover compared to the same period in 2021.

Another sign: the practice. Before the Beijing Games, the Chinese organisers assured us that the facilities dedicated to Olympic and Paralympic competitions would be left as a legacy to encourage the development of winter sports. They are keeping their word.

The Xinhua agency announced that the Beijing National Aquatics Centre, which was transformed into an ice rink for the 2022 Winter Games, will be open to the public from 16 April. It will remain open for a month.

Visitors will be able to see the Ice Cube from the inside, including the athletes’ changing rooms, the mixed zone and the podium. They will also have the opportunity to try their hand at curling. In exchange for a 90 yuan (13 euros) entrance fee, they will even be able to put on special shoes, step on the ice and throw six stones, all under the supervision of a professional coach.

The same pilot experiment initiated by the site’s promoter offers group sessions for companies wishing to motivate their employees. Cost: 3500 yuan per hour (500 euros) for the entire rink. The service includes curling equipment, a team of coaches and logistical support.

Since the end of the Winter Games, Chinese Olympic medallists have been called upon to contribute their voice and experience to the effort to promote winter sports. On Wednesday 13 April, a handful of them flocked to the Shougang venue in Beijing, which had been used a few weeks earlier for the Big Air events.

Among them was Su Yiming (photo above), China’s first Olympic gold medallist in freestyle skiing. Perfectly prepared for the exercise, the young athlete played his part without a false note. “For a long time, Chinese male snowboarders were not among the world’s elite, he told the young fans gathered at the site, urging them to try their luck. But, thanks to my hard work, I want to show that Chinese snowboarding has now reached the top level in the world.”

Liu Haitao, a Shijingshan district official, was quoted by China Daily as saying, “Thanks to the Beijing Winter Olympics, participation in winter sports has become a new trend among our citizens. Every year, about 50% of our population participates in winter sports.”

Even before the opening of the Beijing 2022 Games, the Chinese authorities had assured that more than 346 million Chinese had tried winter sports in one form or another since the Chinese capital was awarded the 2022 Winter Games in 2015. The figure had seemed unreal. It is likely to continue to rise.