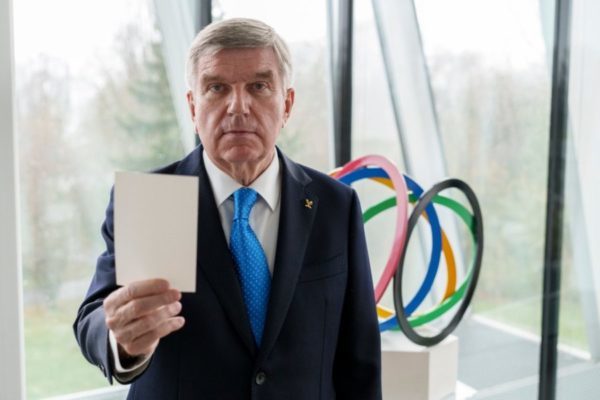 White card or red card? The IOC celebrated the International Day of Sport for Development and Peace in its own way on Wednesday 6 April.

In a lengthy statement, the Olympic body recalled how sport and the Games have brought people together over the years, “building bridges and promoting understanding.” Among the examples cited by the IOC were Thomas Bach’s call for solidarity and peace in his speech at the opening ceremony of the Beijing 2022 Games; the joint parade of the two Koreas at the Sydney 2000, Athens 2004, Turin 2006 and more recently PyeongChang 2018 Games; and the refugee team at the Rio 2016 and Tokyo 2020 Games.

On Wednesday 6 April, Thomas Bach also marked the occasion by holding up a white card (photo above), the symbol of peace through sport initiated by the Peace & Sport organisation. The image was relayed by the IOC on social networks.

At a time when the news is dominated by the invasion of Ukraine by the Russian army, the day of 6 April took on a particular resonance in the sports movement. Forgetting for a while its sacrosanct political neutrality, the IOC took the lead in calling on all international federations to ban Russian and Belarusian athletes and officials from competitions as soon as the conflict began on 28 February. Its Executive Board also maintained its “urgent recommendation” not to hold any sporting event in Russia or Belarus.

The Olympic movement followed. En masse. The vast majority of international federations closed the door to events for athletes from both countries, often with immediate effect and at least until the end of the year. Few of them dared to take a middle way, accepting Russian and Belarusian competitors under the guise of neutrality. FINA tried. But it finally backed down in the face of threats from several countries – Switzerland and Germany – to boycott the 2022 World Swimming Championships in Budapest if Russian swimmers were present in the pool.

On the sidelines, the World Olympians Association (WOA) took a position contrary to the IOC’s recommendation. It opposes a collective exclusion of Russian and Belarusian athletes. Its Executive Committee suggests that the decision to participate or not in a competition should be left to each individual, based on the fundamental principles of the Olympic Charter. It recalls that, according to this Charter, the practice of sport must not be subject to discrimination, including on the basis of “race, colour, sex, sexual orientation, language, religion, political or other opinion, national or social origin, property, birth or other status“.

For Russian athletes, the year 2022 ended when it had just begun. But in an embarrassing twist, the country’s leaders continue to hold office in the Olympic movement without having been booted out.

Before its invasion of Ukraine, Russia had three presidents of an international federation in an Olympic sport: Umar Kremlev in boxing (IBA), Vladimir Lisin in shooting (ISSF), Alisher Usmanov in fencing (FIE). The first two are still in place. The third was forced to step aside and temporarily give up his presidential seat, due to the sanctions taken against him by the European Union. They prevented him from travelling to Europe, and therefore from going to Lausanne, to the headquarters of the FIE.

Last week, a Russian delegation was present in Doha for the annual FIFA congress. Its officials attended the meeting without any particular regime being imposed on them. However, the Russian national team has been permanently ruled out of the 2022 World Cup in Qatar.

The IOC, for its part, did not suspend the Russian Olympic Committee (ROC). Nor did it ban, at least temporarily, its two members with Russian passports: former pole vaulter Yelena Isinbayeva and former tennis player Shamil Tarpishchev. Hard to understand.