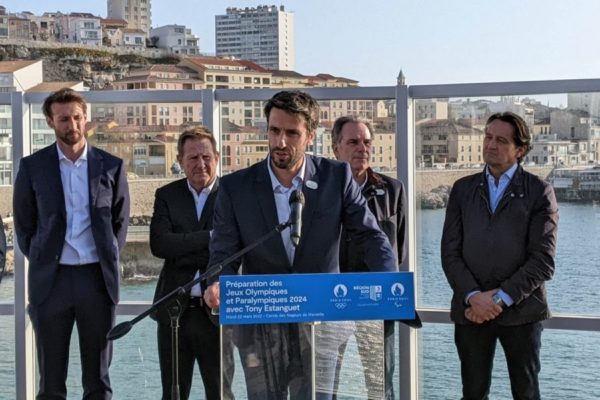 Tony Estanguet is in Marseille. A two-day visit, which began on Tuesday 22 March and continued on Wednesday. Two days to smell the sea air, to talk about sailing, and to repeat once again that the 2024 Summer Games will not only be for Paris, but for the whole of France.

In Marseille, then. But, as expected, the president of the Paris 2024 OCOG could not avoid the question of the moment, even several hundred kilometres from the action: Hall 6 of the Parc des Expositions at Porte de Versailles, scheduled to host the preliminary round of the Olympic basketball tournament.

Chosen as a replacement site at the end of 2020, after a rewriting of the Olympic system, the hall does not please the international basketball body, FIBA. It is too small, too low-ceilinged and poorly ventilated. It has become since last week the target of criticism from several of the best French players, runners-up in the Olympic Games last summer in Tokyo.

“How can we accept to see basketball, the most popular team sport at the Olympics, being sent to the Parc des Expo? The ceiling is too low, the room is not suitable,” New York Knicks player Evan Fournier said on his Twitter account. “I’m not going to play in a room where I hit my head when I shoot,” said Rudy Gobert of the Utah Jazz in an interview with L’Equipe.

In the face of the controversy, fuelled by French players who have never set foot in the room in question, Tony Estanguet wants to reassure. He is calming the game. He explained this on Tuesday 22 March, on the fringes of a visit to the Marseille Swimmers’ Circle: “We are finding solutions as we go along. Each one is in his role in trying to have the best conditions of success for his sport. But, overall, things are progressing quite well. We are regularly in contact with FIBA. We have a number of meetings this week to continue to improve the basketball dossier.”

Tony Estanguet insists that the OCOG will not deviate from its line of conduct, defined by the imperatives of sobriety, cost control and budgetary rigour. “Since the beginning of the project, the objective for Paris 2024 has been to succeed in the 878 events that are on the Games programme, he explained on Tuesday 22 March in Marseille. We have 32 Olympic sports and 22 Paralympic sports to organise, all within a new model of sober organisation. We are not going to use the Games to build infrastructures for just a few days of competition.”

The message is clear: no question of giving in to everyone’s demands. The OCOG wants to remain in control of its budget. It will not question its principles at the first salvo of criticism on social networks.

In Marseille, Tony Estanguet did not just talk about basketball. The President of the OCOG spoke above all about sailing, the first reason for his visit to the city of Marseille. And he confirmed that the project for the development of the harbour, where the Olympic events will be held, was now complete.

“The project is completely stabilised for the sailing competitions,” he assured. The financing plan is complete. Every player wanted to contribute to the success of the project. It is important for us to leave a legacy to the population and the territory, notably better infrastructures to launch the boats.”

The total cost, announced at €41 million, will be covered in large part by SOLIDEO (€25 million), thanks to contributions from the city of Marseille and the French state. The rest of the funding will be provided by the Bouches-du-Rhône department and the Provence-Alpes-Côte d’Azur region.

Renaud Muselier, president of the Provence-Alpes-Côte d’Azur regional council, confirmed this on Tuesday 22 March: “Financially, everything has been finalised. It wasn’t easy, but all the institutional partners played their part.”

As for the question of the 5,000-seat grandstand, initially planned on the Corniche but abandoned for security reasons, it is said to be in the process of being settled. The temporary installation will only be moved. It could be set up on the beach, a solution that would have the merit of not hindering traffic, while ensuring that the public has an unobstructed view of the Olympic regattas.