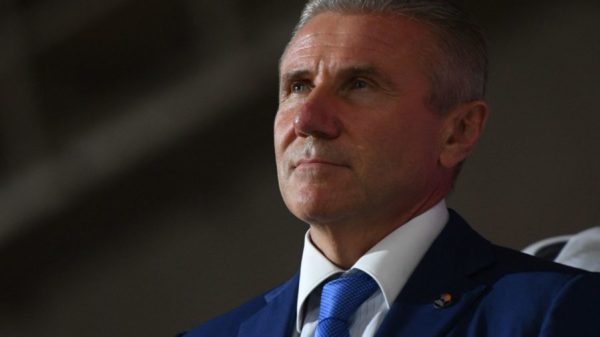 He had remained very silent since the beginning of the Russian invasion of Ukraine, refusing media requests. Sergey Bubka has now come out of his silence. Unsurprisingly, the former pole vaulter has spoken out for the IOC, his “second home”, where he is a member of the Executive Board.

President of the Ukrainian Olympic Committee, Sergey Bubka gave a lengthy response to an interview conducted by the Lausanne-based body. The interview is a formula rarely used by the IOC, especially with its officials. The former track and field legend spoke frankly about his fears for the future of his country and his concerns for the safety of his athletes.

“I am spending every second of every day coordinating efforts with the IOC, my NOC team, the National Federations and the government to identify where the athletes, coaches and their families are located, and then work out how we can best help them,” explains Sergey Bubka, who was asked by the IOC shortly after the conflict began to coordinate aid to the Ukrainian Olympic community from Lausanne. The IOC released the sum of US$200,000 in the early days of the conflict to start the mechanics of the Olympic movement’s assistance.

Sergey Bubka explains: “It is very hard, as people are constantly dropping out of communication, and we are very worried for their safety.I spend my entire day in meetings and on the phone. I can have dozen of calls in as many minutes. I sometimes fall asleep at midnight with the phone in my hand. But like all Ukrainians, every day I struggle to sleep. So I wake up again at three in the morning and turn back to my phone to make more calls and exchange messages with family, friends, athletes and others in our sports community. I sometimes take sleeping pills, but they only get me another couple of hours until sleep is interrupted again.”

For Sergey Bubka, 58, an IOC member since 2008, there is no doubt that Ukrainian athletes must continue to compete, despite the war, despite the risks and difficulties of training and travelling. “Our athletes can inspire others by showing the resilience of the Ukrainian people,” he explains in the IOC interview. They can help send a message of solidarity and peace.

Yaroslava Mahuchikh listened to him. The 20-year-old Ukrainian won the world indoor high jump title on Saturday 19 March in Belgrade (Serbia). With a height of 2.02 m, she added a first world victory to her list of achievements, after her bronze medal last summer at the Tokyo Games.

The young woman recounted her journey to the Serbian capital to take part in the World Indoor Athletics Championships. She had to leave her home in Dnipro, Ukraine, and spend several days in a cellar, sheltered from Russian attacks. Then she travelled for three days and almost 2,000 kilometres by car to Serbia.

“It was very important for me, my family, my country, she told BBC Sport after her victory. Jumping here was very difficult psychologically because my heart remains in my country. But I think it had to be done. I am looking to protect my country, on the track, on the vault.”

Yaroslava Mahuchikh won the world title in the absence of the favourite, Mariya Lasitskene, the Olympic champion. The Russian was absent from the competition, like all the other athletes from her country. She was excluded after the decision of World Athletics to ban Russian and Belarusian athletes. She will be there for the rest of the season. Her young Ukrainian rival, on the other hand, admits she knows little about her immediate future. She lives from day to day, with the fear of tomorrow.