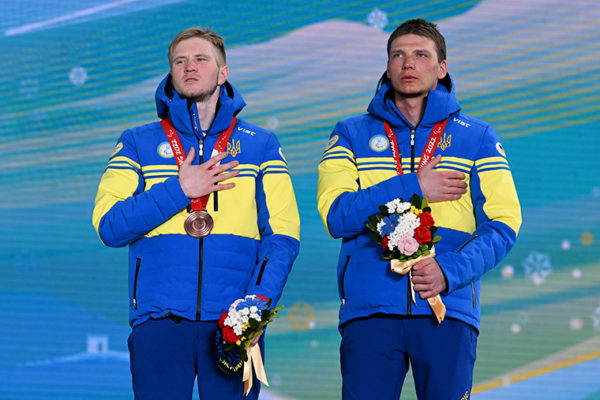 Striking. At the Beijing Paralympic Games, two countries dominate the medal table as the event passes the halfway mark. Two nations that, for very different reasons, were hard to imagine in such a flattering position.

China has long been singled out as the lowly of the lowly at the Paralympic Winter Games, but it is leading the race. By midday on Wednesday 9 March, it had a total of 27 medals, including eight gold. This is impressive. One place behind, Ukraine had a slightly less spectacular collective result: 17 medals, including six gold. The Ukrainians won nine of the 18 medals awarded on Tuesday 8 March in the biathlon. They achieved two trebles in this discipline.

The Ukrainians rose to the challenge. They marched in the opening ceremony. Then they put on their competition gear. Since then, the result almost speaks for itself. Motivated by the invasion of their country, the Ukrainian athletes responded to the Russian aggression with their weapons: determination, the will to win and performance.

On Tuesday 8 March, the podium in the men’s middle-distance race for the visually impaired, one of the biathlon events, was occupied by three Ukrainian athletes. A hat-trick. On the third step, Dmytro Suiarko (photo above, left, with his guide Oleksandr Nikonovych). The Ukrainian held his medal with careful gestures. Then he told about his race.

“I am happy, of course, but you know the situation in Ukraine, he explained after the competition to the Beijing 2022 Olympic Information Service. In the last loop, I had to make up a 10-second deficit because I missed two targets on the shooting range. In our event, you have to be totally focused. Mine was not today. The day before, I learned that my house, where I lived in Ukraine before the Paralympics, was destroyed by bombs. Even with a medal around my neck, I can’t feel really happy.”

Dmytro Suiarko lives in Chernihiv, a city about 150 km north of Kiev. Its buildings have been bombed for almost two weeks. A residential area was targeted for attack late last week. According to the Ukrainian authorities, several dozen people died as a result of the bombing.

Anastasiia Laletina did not see the podium. The young Ukrainian biathlete had entered the competition on Tuesday 8 March with a good chance of a medal in the middle distance sitting event. But she did not make it to the start. She could not.

A spokeswoman for the Ukrainian delegation confirmed to the media that Anastasiia Laletina had learned before the start of her competition that her father, a soldier in the Ukrainian army, had been taken prisoner by Russian forces. He was reportedly beaten by Russian army soldiers.

The young athlete, only 19 years old, simply could not find the strength to start. She remained in the village of Zhangjiakou, being treated by a delegation doctor.