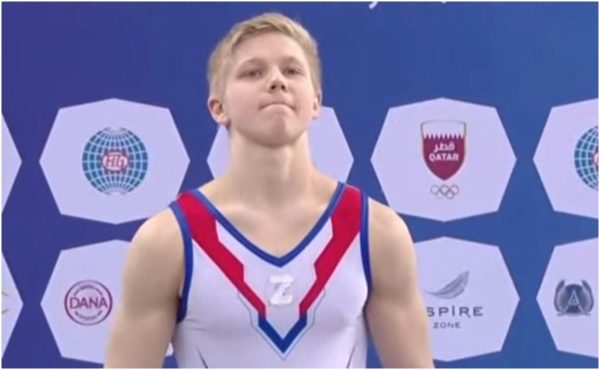 The image has already gone around the world. It leaves a strange taste. Ivan Kuliak, only 20 years old, one of the youngest Russian gymnasts, climbed on the podium of the parallel bars event of the World Cup in Doha, on Saturday 5 March, wearing a jersey with the letter Z, symbol of the support to the invasion of Ukraine by the Russian army.

Ivan Kuliak, who came third in the competition, went to the medal ceremony having covered his country’s flag with only the letter Z, written with white tape. The young Russian then avoided the winner of the competition, Illia Kovtun from Ukraine, as best he could. According to several witnesses, the two gymnasts did not shake hands.

The International Gymnastics Federation (FIG) did not remain without reaction. The next day, it announced in a brief statement on its website that it had asked its Ethics Foundation to open a disciplinary investigation into Ivan Kuliak, “after his shocking behaviour during the Artistic Gymnastics World Cup in Doha, Qatar“.

The Doha leg of the World Cup was the last one in which Russian gymnasts were allowed to participate. Following the recommendation of the IOC, the FIG had decided the day before the incident, Friday 4 March, that Russian and Belarusian athletes, officials and referees would be banned from all its competitions as of Monday 7 March. They are therefore excluded from the World Acrobatic Gymnastics Championships, scheduled from 10 to 13 March in Baku, Azerbaijan.

At 20 years old, Ivan Kuliak is still little known in the world of gymnastics. A student of physical education at the Smolensk State Sport University in Russia, he won the all-around title at the national junior championships in 2019. His athlete profile on the official FIG website mentions that his biggest ambition is to participate in the 2022 European Multi-sport Championships in Munich. Obviously, he will not be there.

The young gymnast is not the first Russian athlete in his discipline to openly show his support for the military offensive decided by Vladimir Putin. Svetlana Khorkina, a gymnastics legend and double Olympic champion on the uneven bars (1996 and 2000), did it before him, posting a message of encouragement to the Russian soldiers on her Instagram account last week. This was an expected stance from this person close to the Moscow regime and a former member of the Duma.

Ivan Kuliak is the first Russian athlete to have displayed a belligerent position on the competition field. The first and probably the last, as Russians are now banned from the vast majority of international competitions. His gesture will undoubtedly earn him a personal sanction from the FIG. But it remains an isolated case.

Since the beginning of the conflict, Russian athletes have been very discreet, most often for fear of repression. But some big names have not hesitated to publicly express their call for peace, although they have been careful not to mention Vladimir Putin.

Fedor Smolov, one of the most followed national football team players in Russia, posted a black square on his Instagram account with the hashtag #NOtowar. Nikita Zadorov, a Russian NHL and national hockey player, used the same medium to call for peace.

One of Russia’s hockey stars, Alex Ovechkin, a three-time world champion and current captain of the Washington Capitals in the NHL, spoke more directly at a press conference. “Please, no more war. No matter who is at war – Russia, Ukraine, different countries – we have to live in peace,” he said. Asked about his previous support for Vladimir Putin, Alex Ovechkin said: “He is my president. But as I said, I don’t do politics. I am an athlete. I hope that everything will work out quickly. It’s a difficult situation right now for both sides.”

Biathlete Larisa Kuklina posted an image of herself with a split heart, illustrated with the colours of the Russian and Ukrainian flags. And this caption: “What’s going on? Stop it! This is the 21st century!“