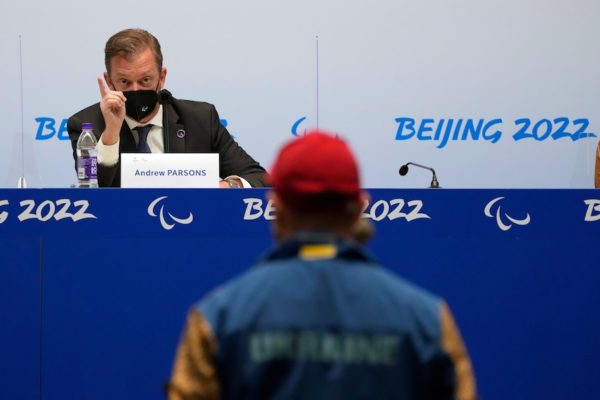 D – 1 for the Beijing 2022 Paralympic Winter Games. The event opens on Friday 4 March at the Bird’s Nest in the Chinese capital. It begins against the backdrop of the war in Ukraine. This was expected. It also starts in a climate of divisions within the Paralympic movement. That was less expected.

The reason was the decision announced on Wednesday 2 March by the International Paralympic Committee (IPC) to authorise the participation of Russian and Belarusian athletes. Of course, both delegations will march under a neutral banner. Their representatives will not be allowed to wear their country’s colours. The Paralympic anthem will be played if they win. They will not be on the medal table. But they will be there. They will be at the start.

For the Russian competitors, the IPC decision does not change anything. They were already competing under a neutral banner, as they did at the Tokyo 2020 Games, as a result of Russia’s two-year suspension from the international sports movement. But their participation in the Beijing Paralympic Games takes on a whole new dimension.

To the surprise of many, the IPC did not follow the IOC’s recommendation, published two days earlier, to ban Russian and Belarusian athletes. Often firmer than its Olympic counterpart, the Paralympic body opted for a middle way. It condemned the Russian aggression in Ukraine, but without punishing the athletes.

Andrew Parsons, the IPC president, explained this on Wednesday 2 March at a press conference at the Main Media Centre in Beijing. “This is a very difficult moment for the world and the Paralympic movement, said the Brazilian leader, visibly uncomfortable with a decision that he acknowledged was not unanimously supported by the body’s board. Unlike their respective governments, these Paralympic athletes and officials are not aggressors.”

Andrew Parsons continued: “We do recognise the seriousness and magnitude of the situation but we just tried to follow the rules and separate politics from sport.” The IPC said in its statement that political neutrality is a pillar of its new constitution, which was adopted last year at its General Assembly.

The IPC’s decision comes late. It comes only two days before the start of the Paralympic Games, a time when all the delegations have arrived in China. Ukraine, in particular, arrived in the Chinese capital on Wednesday with a delegation of 20 athletes and nine guides.

By wanting to wait for all the members of its board to arrive before deciding on the issue, the Paralympic body undoubtedly made its task more difficult. It met at a time when the Russians and Belarusians had already taken up residence in the athletes’ villages, some even having taken part in the first training sessions.

The announcement by the IPC sent a chill through the foreign delegations. The most discontented were heard. The Germans and the British, in particular. “Not excluding these two delegations is incomprehensible, said Friedhelm-Julius Beucher, President of the German Paralympic Sports Federation. We are arguing on the basis of rules, while in Ukraine they are killing without any rules. This decision sends a very bad signal.”

Britain also condemned the IPC decision. Culture Minister Nadine Dorries, who is also in charge of sports, announced her intention to consult with sports organisations on how best to protest against the decision. “The IPC must join the rest of the world in condemning this barbaric invasion by banning Russian and Belarusian athletes from competing,” she said in a statement.

The same incomprehension was felt on the French side. Its national paralympic committee (CPSF) explained in a statement that this “decision, obviously difficult for the IPC, was not the one they wanted. But with two days to go before the start of the competitions, it is high time to focus on the sport, out of respect for the athletes.”

Switzerland also admitted that it did not understand the IPC’s position. The US Olympic and Paralympic Committee (USOPC) said it was “disappointed” by the announcement of the participation of Russian and Belarusian athletes. Canada has indicated that it is considering challenging the IPC membership of both countries.

The Paralympic body announced through its spokesperson, Craig Spence, that an extraordinary General Assembly will be held in the course of 2022. It will address the issue of political neutrality. “The question of whether to make compliance with the Olympic Truce a condition of membership and to terminate the membership of the Russian Paralympic Committee and the Belarus Paralympic Committee” will be put to the vote.

The IPC also announced that it would not organise any more events in Russia or Belarus until further notice.